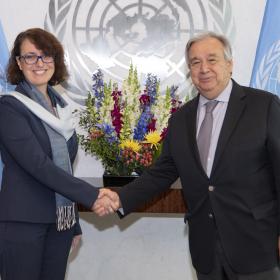 The Permanent Mission of EPLO to the UN is headed by Permanent Representative and Ambassador Barbara Faedda.

On 21 May 2019, Ambassador Barbara Faedda, Ph.D. presented her credentials to the Secretary-General of the U.N., António Guterres. Dr. Faedda is also the Executive Director of the Italian Academy for Advanced Studies at Columbia University in NYC. She received her Ph.D. in Legal Anthropology and Social Science from the Università degli Studi Orsola Benincasa, Naples, after studying at Sapienza Università di Roma, in Paris at the Summer Institute of International & Comparative Law (co-sponsored by Cornell Law School and Université Paris I Panthéon-Sorbonne), and at Boston University (as a visiting scholar).

Barbara Faedda was born in Rome, Italy, and she has Italian and U.S.A. citizenship. She is married to an attorney and they have a daughter.