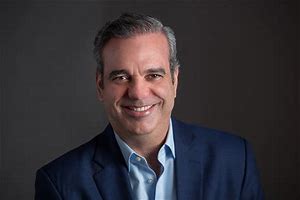 Luis Rodolfo Abinader Corona, was born in the city of Santo Domingo on July 12, 1967, married to Raquel Arbaje Soni, and is the father of three daughters, Esther Patricia, Graciela Lucía and Adriana Margarita. He is the son of businessman and political leader José Rafael Abinader Wassaf, and Mrs. Rosa Sula Corona Caba,

He studied high school at Colegio Loyola, obtained a degree in Economics from the Instituto Tecnológico de Santo Domingo. He completed postgraduate studies in Project Management at the Arthur D. Little Institute in Cambridge, Massachusetts. He also studied Corporate Finance and Financial Engineering at Harvard University and Advanced Management at Darmouth College in New Hampshire. Elected vice president of the Dominican Revolutionary Party at the 2005 National Convention.

He is currently Executive President of the ABICOR Group, which has developed and operated important tourism projects in the country. This family group directed the business project of what is today the company Cementos Santo Domingo, of which he is Vice President He has been president of the Association of Hotels of Sosúa and Cabarete and is a member of the Board of Directors of the National Association of Hotels and Restaurants (ASONAHORES), Member of the Board of Directors of the Fundación Universitaria O&M

Recognized by the State Congress of Rhode Island, United States, for his career in the public, educational and business fields. He also received recognition from the Mayor of Boston and the Massachusetts State Senate for his contributions to higher education, civic engagement, and community service.

He was a candidate for the vice presidency of the Republic for the Dominican Revolutionary Party, in the 2012 presidential elections. Luis Abinader was elected presidential candidate at the PRM convention held on April 26, 2015.

His candidacy is chosen with more than 70% of the votes assuming a victory recognized from the first bulletin by the rest of the applicants. He worked to achieve a presidential project that unified all the opposition and the majority of society with a view to the May 2016 elections.

Despite participating in very adverse conditions, with a party that barely had a year and a half of existence and competing with a president who had all the resources of the State in his favor, Abinader obtained more than 35% of the votes in the elections of May 15, 2016, leaving the PRM as the second political force in the Dominican Republic.

For 2019 he is elected again as a candidate for the presidency in the internal convention of his party, becoming the President Elect of the Dominican Republic in the presidential elections of July 5, 2020, for the period 2020-2024.