The agricultural sector is yet highly vulnerable to extreme weather events that increase due to climate change. This became yet again evident in 2015 when Cyclone Pam hit Vanuatu and 96% of food crops were destroyed. Food security is however, crucial to achieve the 2030 Agenda.

Following the global trend, the service sector of Vanuatu, as in many other small island developing states, grew rapidly over the past years. Yet, this growth is unstable and affects only a small part of our population which is evidenced by the fact that the service sector comprises 70% of Vanuatu's economy while only 30% of the population works in this sector. Thus, it remains particularly important for Vanuatu to increase climate resilience, develop new risk transfer mechanisms for SIDS that increase social protection, diversify the economy and promote integrated rural development. Linkages between the service sector and the agriculture sector must be expanded in order to create greater synergies. 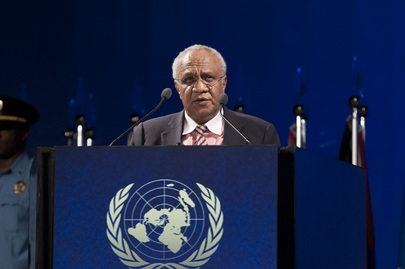 Exploiting the linkages and synergies between the service sector, particularly tourism, and the agricultural sector provides great potential to promote sustainable development. This illustrates the need to move from a silo approach to an integrated and inclusive path where the interconnectedness between various sectors of the economy is considered. Furthermore, it remains essential to transform the economy from raw materials to value-adding so that economic gains can be maximized.
In order to achieve these goals and ensure the success of the 2030 Agenda for Sustainable Development, the Vanuatu Mission works engages in dialogue with development partners, as well as participates in other forms of cooperation such as South-South cooperation or the SIDS-Dock initiative. This initiative for instance aims at promoting renewable energies in small island developing states by linking investments into renewable energies to carbon markets.