Statements by Mrs. Sonali Samarasinghe, Minister, delivered at the 29th Meeting of States Parties to the UN Convention on the Law of the Sea, 17-19 June 2019 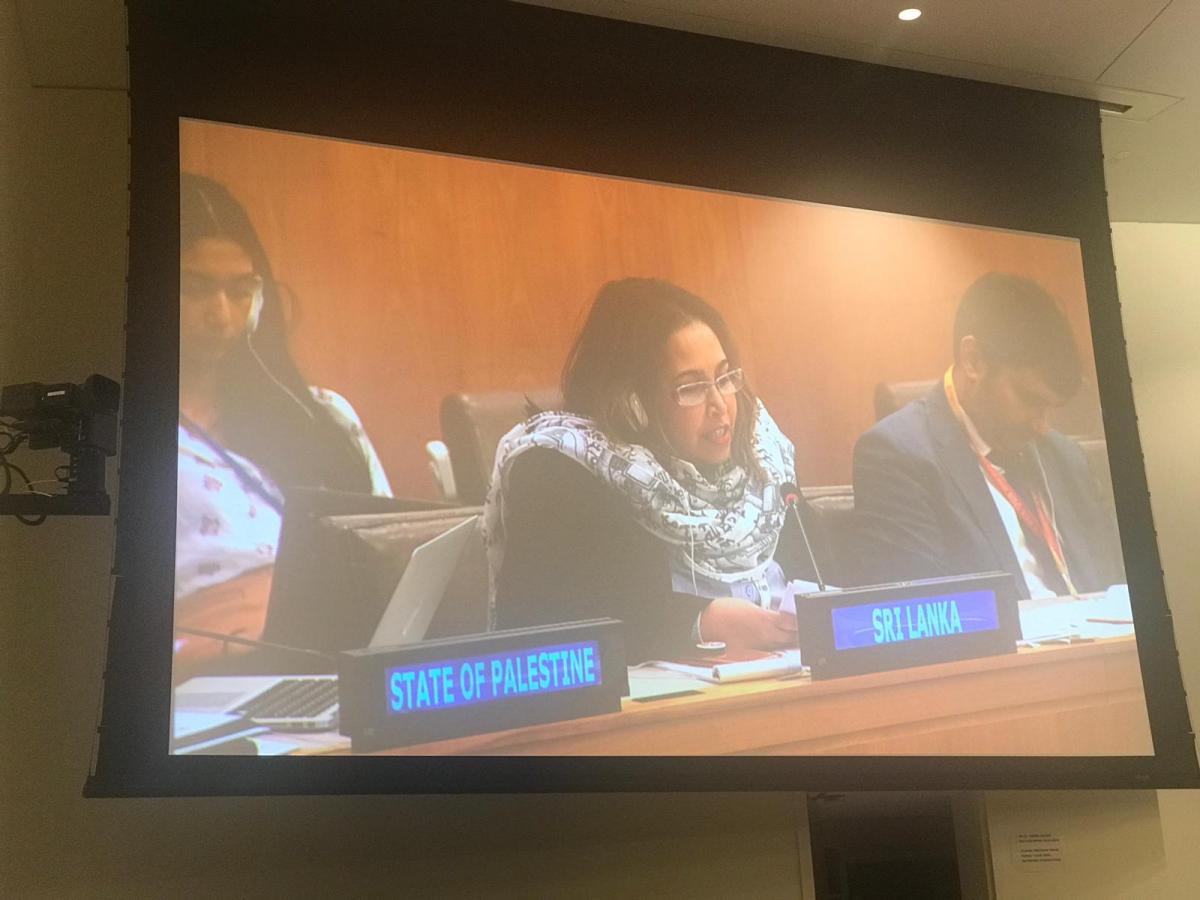 Firstly let me congratulate you and your bureau on your election. Sri Lanka stands ready to support you in your work as you guide us through this 29th Meeting of States Parties. We appreciate the Secretary General’s opening remarks this morning and we would like to thank the Secretariat for its extraordinary efforts in supporting the work of UNCLOS.

Sri Lanka has been deeply involved in developing ocean governance processes since the time of negotiation of the United Nations Conference on the Law of the Sea (UNCLOS).  Having chaired the Third International Conference on the Law of the Sea towards a development of a new legal regime, we are proud indeed to join other member states in celebrating 25 years of the entering into force of the Convention. Sri Lanka was instrumental, as Chair, in the historical processes that created the three key institutions established by the Convention, namely, the Commission on the Limits of the Continental Shelf, the International Seabed Authority and the International Tribunal for the Law if the Sea.

Island nations like ours are particularly vulnerable to the impact of the oceans. The Indian Ocean in which we are located, provides employment, food and avenues of trade and commerce. Our large coastal communities survive at ocean level.  The rise of the seas, pollution of the oceans, and depletion of fish adversely impact our nation.

At a time when the world order is becoming more unpredictable, polarized and fragile we find that multilateral frameworks, are increasingly coming under pressure. The ability of the collective to manage interdependence effectively is at risk. For small countries – like ours, such historic treaties as UNCLOS and its unified and universal character allows us a voice in how the global maritime order is shaped. The balance and cooperation enshrined in its content allows us to derive benefits for the welfare of all our people.

We cannot properly implement SDG Goal 14 if we do not guarantee the peaceful use of the oceans and freedom of navigation to be enjoyed by all states. The freedom of navigation over the high seas has evolved over centuries and is today firmly established both in customary law and in treaty law, such as UNCLOS. Target 14c of Goal 14 envisages enhancing the conservation and sustainable use of the oceans and their resources by implementing international law as reflected in UNCLOS. These principles enshrined in International law are designed to promote the legal order of the oceans which is vital for maintenance of peace, Security, the environment, health of the oceans, peaceful trade and communications, and will ensure progress for all peoples of the world.

We look forward to the third session of the intergovernmental conference to consider the recommendations of the Preparatory Committee on the elements, and to elaborate the text of an international legally binding instrument under the United Nations Convention on the Law of Sea, on the conservation and sustainable use of marine biological diversity of areas beyond national jurisdiction (BBNJ).

We remain hopeful for a successful session this August to launch us towards developing the instrument as soon as possible – which Sri Lanka believes, must be firmly based on the legal framework of UNCLOS and also based on the targets of goal 14. Sri Lanka remains committed to maintaining a rules-based order firmly grounded on UNCLOS which continues to serve as the Constitution of the Seas.

Sri Lanka expresses its deep appreciation for the Work and recent judgments of the Tribunal on the Law of the Sea (ITLOS) and recognizes its important role in clarifying key issues related to the Law of the Sea Convention, and in the peaceful settlement of disputes.  Through its judgments and advisory opinions, the Tribunal has broken new ground and contributed to the progressive development of the law of the sea and the interpretation and application of the Law of the Sea Convention. The Tribunal has also made a significant contribution to capacity building activities of developing countries. In this regard we take special note of the training programs, internship programs, regional workshops and the Summer Academy, and encourage ITLOS to expand and diversity these programs as far as possible. We once again thank the Tribunal’s president and other judges of ITLOS for their invaluable contributions, and Sri Lanka is pleased to record its unstinted support to the work of the Tribunal.

We thank Secretary General Michael Lodge for his comprehensive Report.

Sri Lanka is an island nation that is heavily impacted by the health of the oceans and by climate change. All of us are inextricably bound together in humanity through our oceans, and as member states, we have common but differentiated responsibilities to preserve our oceans for future generations.

The Convention places a responsibility on states to take individually or jointly as appropriate, all measures necessary to prevent, reduce and control pollution of the marine environment from any source, in accordance with their capabilities, and to harmonize domestic policies in this connection.

The UN, during the first Oceans Conference in 2017, declared a Decade of Ocean Science for sustainable development to be held from 2021 to 2030 with a view to creating a new foundation across the science-policy interface and to strengthen the management of the oceans and coasts for the benefit of humanity.

The first World Ocean Assessment found that much of the Ocean is now seriously degraded. It is important therefore, that when finalizing the mining code and in the adoption of regulations for the exploitation of mineral resources in the Area, we put in place very stringent environment protections so we do not create a destructive cycle of degradation.

Capacity-building is essential to enable informed participation from all member states, and to avoid an ISA regime that is influenced and pushed through by the few.

Due to the fact that scientific knowledge is still so weak regarding the seabed ecosystem, Marine Scientific Research (MSR) is an important tool that should inform the development of the ISA – and the Authority is commended for its extraordinary efforts to continue to receive and analyze MSR data, and review and update the regulatory regime in light of that data in order to safeguard the interests of future generations.

We welcome the work of the Special Representative of the Secretary General for the Enterprise, Ambassador Eden Charles. We look forward to the revised version of the High Level Action Plan to implement the Strategic Plan for the 2019-2023 period adopted at the ISA’s 24th Session. Additionally, we welcome the development of the Key Performance Indicators by the Authority to push forward the implementation of the Strategic Plan.

In conclusion, we thank the Secretariat of the ISA for its invaluable support in providing comprehensive documentation in a timely manner that is of great assistance to us in our work. We look forward to the Sessions in July where will of course celebrate another milestone – that of 25 years of the Seabed Authority.

And I cannot conclude Mr. President without thanking Jamaica for its wonderful hospitality and ofcourse its delicious food.

Sri Lanka thanks the Chairperson of the Commission, Mr. Yong Ahn Park for his comprehensive letter and his oral report.

The Commission on the Limits of the Continental Shelf, the International Tribunal for the Law of the Sea, and the International Seabed Authority, have played and continue to play, critical roles in enabling developing countries like Sri Lanka reap the benefits of ocean resources, in particular, the prospective exploitation of the continental shelf in a sustainable and equitable manner.

The work of CLCS in particular gains added importance as the Continental shelf of each country is unique to its geological surroundings, and warrants careful consideration by the CLCS including special methods as designated under the terms of UNCLOS for the southern part of the Bay of Bengal, in order to reach just and equitable outcomes in relation to the determination of the outer limits.

As a state currently appearing before the CLCS, we would like to acknowledge and commend the high level of scientific standards and high level of engagement in that connection.

In this regard, while noting the option to join the UN Medical Insurance plan as mentioned in the chair’s report, it is our hope that the conditions of service of the members of the Commission including the provision of medical coverage and working methods would be addressed in a satisfactory manner so that the members can continue their work unhindered in a proper working environment, and achieve progress in expediting their workload. We acknowledge and congratulate the CLCS for concluding a record number of submissions despite these challenges.

We are concerned with the limitations placed on the Commission due to the absence of one member and the lack of nominations to fill the vacant seat. We hope this matter can be addressed as expeditiously as possible so the Commission members can run at full capacity and not be overburdened.

We urge the Secretary General to take appropriate measures within overall existing resource levels to further strengthen the capacity of the Division of Ocean Affairs and Law of the Sea serving as the Secretariat of the Commission, in order to ensure enhanced support and assistance to the Commission and its sub commissions in their considerations of submissions.

At this time we would also sincerely wish to thank the governments of countries contributing to the Trust fund for defraying the cost of the participation of CLCS members from developing states.