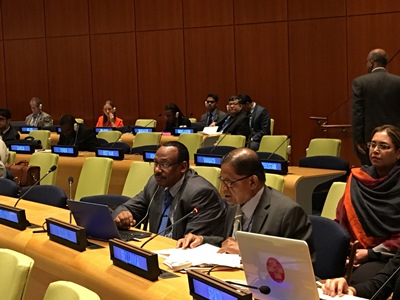 Ambassador Dr. Rohan Perera, Permanent Representative, made a compelling statement on behalf of the Rule of Law in the Sixth Committee of the UN General Assembly today.

Please see below for the full statement.

Agenda Item 84: Rule of Law at the National and International Levels

The Rule of Law lays down the essential framework for all societies both domestically and internationally. It must be the common responsibility of all member states to strengthen the Rule of Law at the national and international levels and Sri Lanka supports all efforts being taken in fulfilling these goals.

Sri Lanka takes note of the Report of the Secretary General on the Strengthening and Coordinating of the UN Rule of Law Activities. We welcome the focus of the present debate on sharing national practices of states in the implementation of multilateral treaties and practical measures to facilitate access to justice for all including for the poorest and most vulnerable among us.

As a nation that has suffered a dark period under the yoke of terrorism and an accompanying culture of impunity, we are actively conscious of the value of a nation, built on the principles of democracy and the Rule of Law. Indeed, we believe it to be the fulcrum upon which a fair and just society rests. Without the rule of law working in tandem with the independence of the judiciary and the separation of powers, there can be no advancement of peace, development or human rights.

Since the change of administration in 2015 Sri Lanka has undertaken significant and compelling reforms to restore and strengthen the rule of law in our country. We have made essential and far reaching amendments to the Constitution, not only to dilute the extensive powers of the Executive Presidency, but also to reintroduce term limits to the presidency which were removed by the former administration. In addition, measures have been taken to strengthen Parliament including through the introduction of oversight committees. We have appointed a Constitutional Council aimed at depoliticizing the public service. Independent Commissions have been established under the Constitutional Council including an Elections Commission, National Police Commission, Bribery and Corruption Commission, and a Human Rights Commission.

Sri Lanka has implemented a vigorous program of action to advance human rights based on a UN Human Rights Council resolution promoting reconciliation, accountability and human rights, which was co-sponsored by Sri Lanka in 2015. We are committed to conducting independent and credible inquiries into alleged human rights abuses, including disappearances, so that non recurrence is guaranteed, and the people of Sri Lanka can steadfastly progress towards reconciliation, peace and stability.

Sri Lanka passed a Right to Information Act in August this year that will ensure freedom of information. We have taken vital steps towards reconciliation by setting up an Office of Missing Persons to address disappearances and extra judicial activity, under a culture of impunity that prevailed before January 2015. We will also be setting up a Truth Seeking Mechanism under the reconciliation process built on the four pillars of truth, justice, reparations and non-recurrence.

We believe that achieving justice in times of transition from conflict and/or state repression, through accountability, redressing victims, and recognizing the rights of victims, promotes civic trust and strengthens the democratic rule of law. We believe that States have a duty to guarantee that violations will not recur, and a special duty to reform institutions that proved to be incapable of preventing the abuses.

A break down in the rule of law will lead to social divisiveness and generate mistrust between groups and in the institutions of the State. It will hamper the achievement of security and development goals and lead to a cyclical recurrence of violence in various forms.

Furthermore while the Rule of Law has traditionally been approached in the context of individual rights, we cannot forget its application to sustainable development. This is reflected in the seventeen goals of the 2030 agenda, more particularly goal 16 onPromoting peaceful and inclusive societies for sustainable development, providing access to justice for all, and building effective, accountable and inclusive institutions at all levels.

It affirms that an effective rule of law at the national and international levels is essential for sustainable development, including economic growth, social development, environmental protection and the eradication of poverty and hunger. Accordingly our Parliament intends to establish by law a Sustainable Development Secretariat with a mandate to monitor the implementation of the SDGs.

The rule of law is threatened and made vulnerable in societies where human frustration is prevalent. The empowerment of women is particularly essential in this regard.

The government of Sri Lanka has remained actively committed to gender equality and the advancement of women. Sri Lanka has ratified the main international human rights instruments and policy documents that are relevant to the issue of discrimination and violence against women.

The government is committed to improving the situation of women affected by the conflict. It has established the Office for National Unity and Reconciliation (ONUR) which is responsible for formulation and coordinating the implementation of the policies and programs to build national unity and reconciliation.

We wish to emphasize the critical role played in strengthening international rule of law, by the principle of sovereign equality, which ensures that all states have an equal opportunity to participate in the international law making process. It is also a principle that protects all states, especially developing countries, from the harshness of an empirically unequal world. It is these core principles of international law on which the contemporary global order is based, that serve to protect those States who do not have the right of standing armies and military capacity.

The Rule of Law is not a concept that can be externally enforced nor can it conform to an external prescription that ignores domestic realities. In order to be effective it must be sensitive to the nuances of each situation. Indeed social, religious, philosophical and cultural factors have played a significant role in the evolution of the rule of law in different regions.

The scourge of terrorism continues to pose a direct challenge to the rule of law at both national and international levels. Thousands of lives are lost, traditional borders on which the legal order is based continue to crumble, and human history is erased by the destruction of cultural property.

It is imperative in this kind of context that we summon our collective will to counter this scourge and that we adhere to international treaty obligations under the framework of treaties for suppression of terrorism. The demonstration of the requisite political will to conclude negotiations on the draft Comprehensive Convention on International Terrorism will bolster the Rule of Law as it continues to struggle against this phenomenon.

Sri Lanka also commends the important contribution made by the Office of Legal Affairs in strengthening the multi-lateral treaty making process.

The participation and active role of developing states in multilateral treaty processes should not be understated, and has often proven vital to the success of such processes. In this regard Sri Lanka recalls the declaration on Universal Participation in the Vienna Convention on the Law of Treaties which states the conviction that ‘multilateral treaties which deal with the codification and progressive development of international law, or object and purpose of which are of interest to the international community as a whole should be open to universal participation”.

Full and effective participation by all states irrespective of size and strength is essential to ensure a resilient international legal framework to serve as a mechanism to strengthen the international rule of law based on the principle of sovereign equality of states.

In this context, Sri Lanka wishes to draw attention to the challenges faced by developing states when it comes to multilateral treaty making processes. These include but are not limited to insufficient financial and administrative resources, and staffing challenges owing to a lack of legal expertise. This is an area where the UN can play a crucial role, in particular, by assisting States with capacity building.

In conclusion Mr. Chairperson, Sri Lanka will continue its efforts to reinforce the rule of law within its domestic legal system and looks forward to contributing actively and decisively to efforts to strengthen the rule of law at the international level.