The United Nations Day of Vesak was celebrated in New York on 05th June 2015 in accordance with the UN General Assembly resolution 54/115 recognizing the day of Vesak internationally as the most significant day for the Buddhists all over the world. 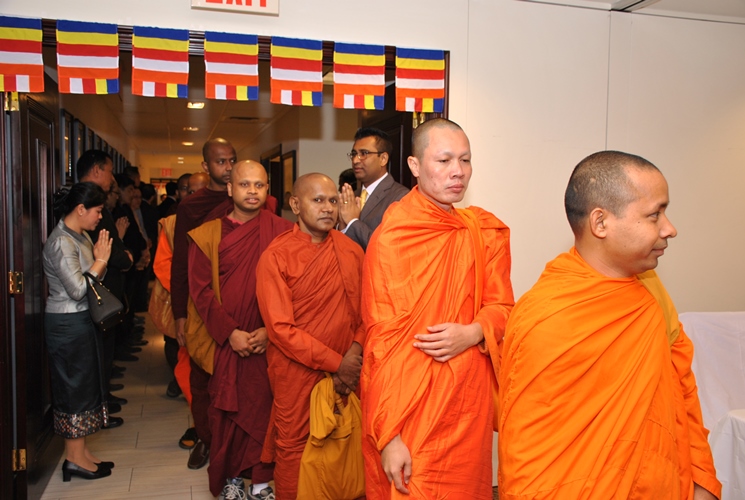 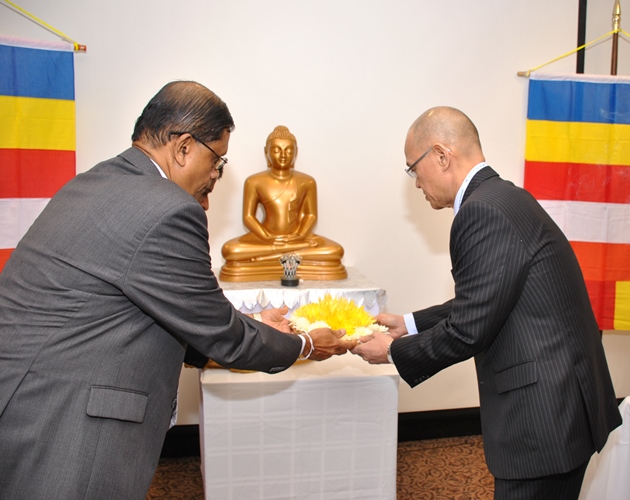 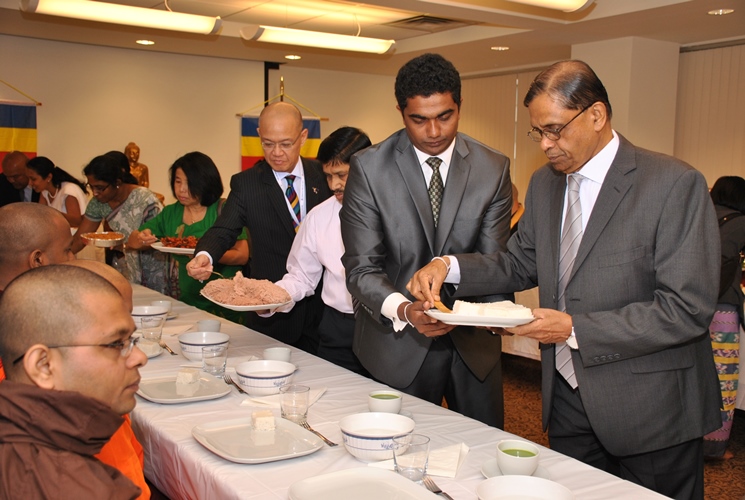 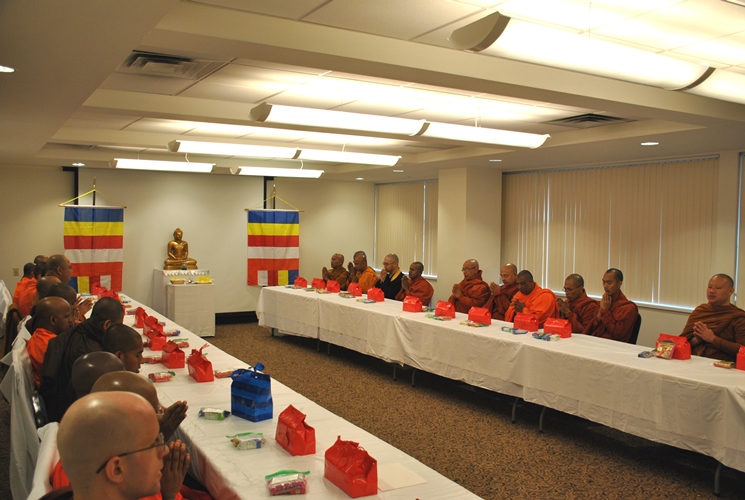 Following the blessings of the Maha Sangha, representatives of Japan, Afghanistan, Bangladesh, Bhutan, India, Indonesia, Myanmar, Nepal, the Philippines, Vietnam, Pakistan, Laos, Malaysia, Russian Federation and Cambodia addressed the General Assembly reflecting on the significance of the day of Vesak and the timelessness of the message of peace and non-violence of the Buddha to a world marred by conflict, violence, poverty and all forms of suffering. State Minister for Foreign Affairs of Japan Yasuhide Nakayama made the statement on behalf of his country. A number of short video clips on the Day of Vesak and Buddhism, including from Sri Lanka, were screened following the statements. 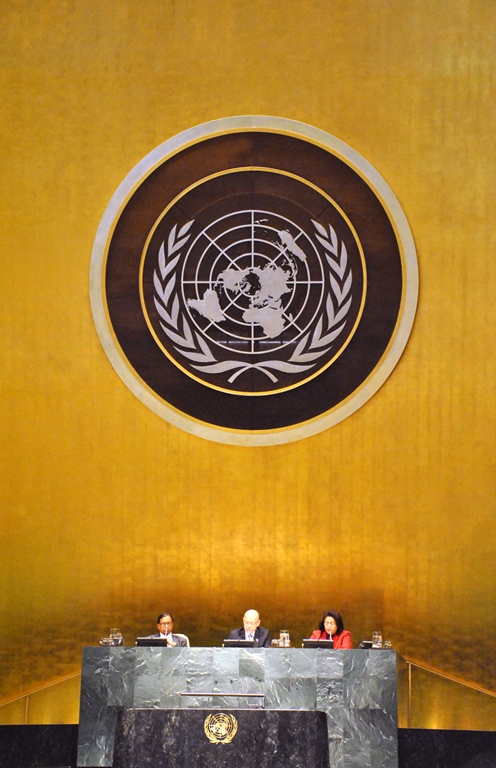 Addressing the General Assembly, Sri Lanka’s Permanent Representative to the United Nations and co-chair of the event to mark the UN Vesak Day, Ambassador Dr. Rohan Perera observed that there was no better place to reflect on the great doctrine of the Buddha-a doctrine of peace and tolerance- than the very seat of the United Nations where humanity has resolved to ‘practice tolerance and live together in peace with one another as good neighbours.’  He expounded on the universal principles contained in the timeless message of the Buddha such as non-violence, peaceful resolution of disputes, building consensus and peaceful co-existence, and observed that the Buddha preached them more than two millennia before the UN Charter was adopted. 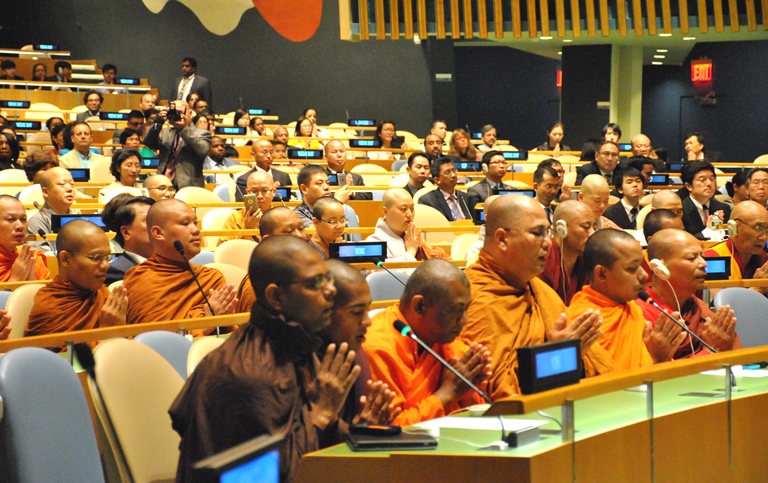 Ambassador Perera referred to the principles of consensus building and democratic governance adopted by the Lichchavis- ‘meet in harmony, discuss in harmony and rise in harmony’, which were endorsed by the Buddha, and observed that these were the same principles-principles of justice, rule of law and good governance- that the Member States are striving to adhere to in the United Nations. 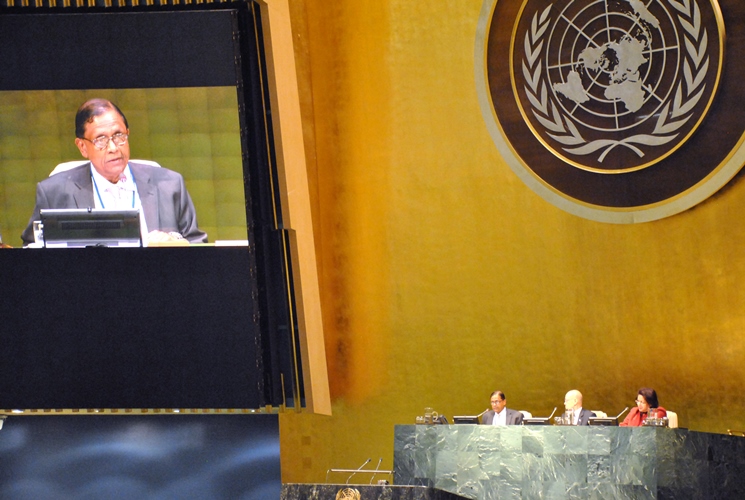 Quoting from the Dhammapada, Ambassador Perera observed that the universal law propounded by the Buddha that hatred never ceases by hatred but by love alone, has utmost relevance to these troubled times when humanity is confronted by mutual distrust, violence and hatred. He emphasized that this eternal law must be kept in mind when one deliberates within the walls of the United Nations.  Ambassador Perera stressed the importance of mending the hearts and minds of the people, and changing them from within, as preached by the Buddha, quoting the verse “to conquer oneself is nobler than conquering thousands of men in a battlefield.”