Sri Lanka today deposited the instrument of ratification of UN Protocol to prevent, suppress and punish trafficking in persons, especially women and children which is commonly called as the Trafficking Protocol of the Palermo Protocols, at a ceremony held in the UN Treaty Section, today.  Ambassador Rohan Perera, Permanent Representative of Sri Lanka and Mr. Santiago Villalpando, Chief of the Treaty Section, participated at this event. 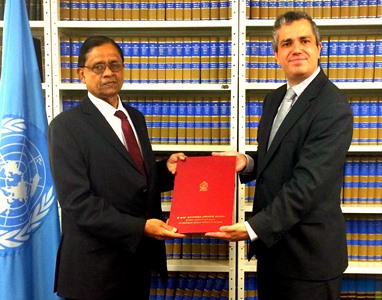 This is one of the three protocols which comes under UN Convention against Transnational Organized Crime (UNTOC) also known as Palermo Convention. Sri Lanka signed this Convention on 13th December 2000 and ratified it in 22nd September 2006. Sri Lanka is the 167th country to ratify the first Protocol of the three Palermo Protocols.