Sri Lanka’s Permanent Representative to the United Nations, Dr. Rohan Perera was invited by the CITES Secretariat to make opening remarks at the celebration to mark World Wildlife Day at the United Nations Headquarters on 1st March 2019 under the theme “Life Below Water: for the People and Planet”.

Dr. Perera stated that Sri Lanka was proud to host the COP18 of the Conference on International Trade on Endangered Species of Fauna and Flora (CITES) in Colombo in May this year.  He added that as a country rich in biodiversity, Sri Lanka took its responsibilities  seriously to protect marine life and hosting the COP18 conference was a reflection of this commitment.   He added that the country had enacted numerous laws to protect marine life and is party to several key international conventions on the protection of fauna and flora. Dr. Perera also drew attention to Sri Lanka’s efforts to combat illegal trade and poaching of marine species and to combat other threats to marine life such as climate change and plastic pollution.

The full text of Dr. Perera’s statement is given below.

in Celebration of World Wildlife Day 2019

“Life below water: for People and Planet” 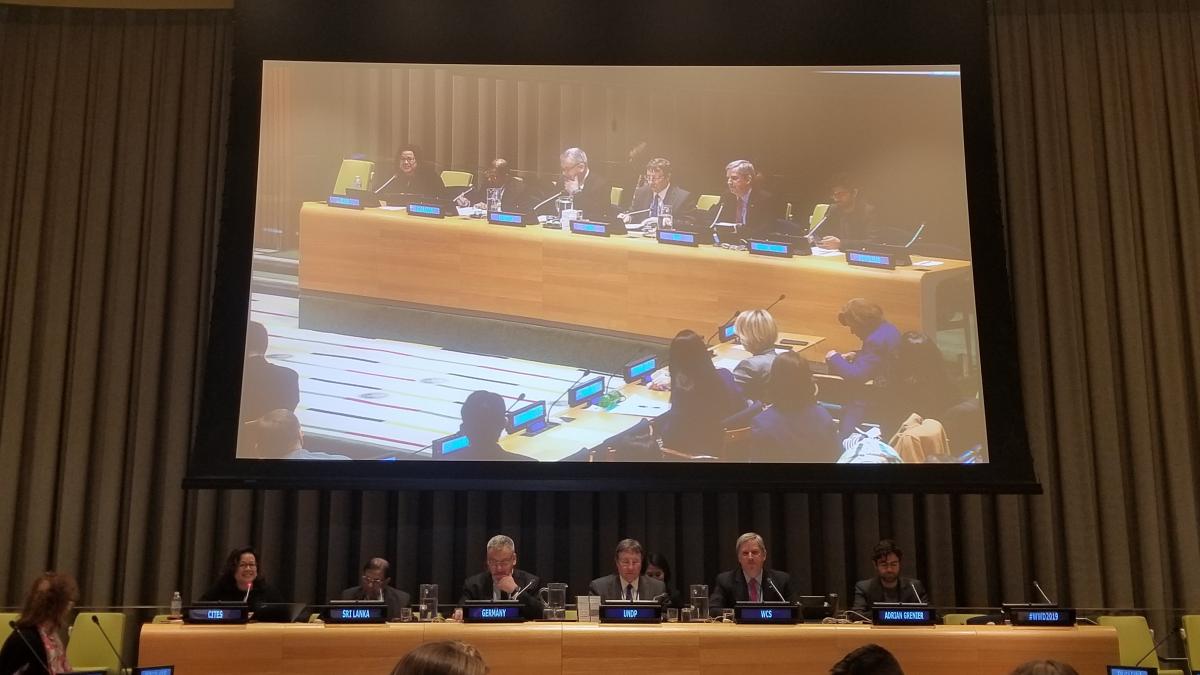 It gives me great pleasure to participate at this event to mark World Wildlife Day which falls on March 3rd.  I would like to thank the CITES Secretariat for providing me with an opportunity, as the representative of the host country Sri Lanka, the venue of COP18, to be a part of this important event. World Wildlife Day provides us with a valuable opportunity to celebrate our planet’s wildlife and how we could preserve this precious resource for future generations.

Sri Lanka is one of the few biodiversity hotspots in the world, with over 7500 plant and several thousand animal species, several of which are endemic.  The protection of this rich biodiversity and the sustainability of our natural resources is a responsibility we take seriously.

This deep sense of commitment has been manifested in our offer to host the 18th Conference of Parties of CITES in Colombo in May 2019, exactly forty years after we became party to this Convention.  We look forward to welcoming over 3000 delegates from the 183 state parties.  We in Sri Lanka believe that this event will further enhance my country’s efforts towards the protection and sustainability of our environment, particularly the life in the seas.

Let me also underline the active role Sri Lanka has played in CITES to protect life below water. During COP17 in 2016, Sri Lanka strongly supported measures for the addition of silky sharks, thresher sharks and mobula rays into appendix II. I am happy to inform that Sri Lanka will be a co-sponsor of the proposals for the listing of the mako shark, wedgefish and guitarfish at the forthcoming COP 18.

As an island nation in the Indian Ocean, our seas are home to some of the most rarest and precious wildlife on this planet. From the great blue whales and shy dugongs, to meandering sea turtles and brilliant corals, the life below the waters of Sri Lanka are as diverse as they are beautiful.

To the people of Sri Lanka, oceans are a matter of survival.  It provides us with employment, food, avenues of employment and opportunities to engage in trade.  Our coastal communities depend on fishing and our tourism sector is built around the ocean. Sri Lanka is also in the centre of one of the key shipping routes in the world.

Yet, the seas that surround us are also our vulnerability, deeply impacted as they are by climate change and pollution. In 2004, Sri Lanka lost over 35,000 people in the Boxing Day Tsunami.  The Indian Ocean continues to experience a rise in sea levels, pollution, depletion of fish and floating plastic waste. This has an adverse impact on the life beneath the oceans. The illegal trade and poaching of marine life is on the increase. It is a threat that the Government of Sri Lanka is deeply committed to resolve.

Sri Lanka has implemented several legal measures to protect its wildlife.  Among the measures adopted to protect life beneath the oceans are the Fisheries and Aquatic Resources Act, Marine Pollution Prevention Act and the Coast Conservation Act. We have also formulated a National Environment Act and the Wildlife Policy of Sri Lanka.

We are deeply conscious that our fate is not in our hands alone.  This is why the Government of Sri Lanka is deeply committed to international initiatives such as CITES.  We are also party to the Paris Climate Agreement and the UN Framework Convention on Climate Change and strongly support the 2030 Development Agenda, particularly SDG 14.  Our efforts are also linked to parallel processes such as those relating to the Law of the Sea.

Today, protecting the life beneath our oceans has become a matter of life and death. I would like to reiterate the words of my Prime Minister, Hon. Ranil Wickremesinghe who succinctly summarized, at the Ocean Conference in New York in 2017, the gravity of the challenge that faces us all today:

“And conferences such as this, remind us that we must reclaim our heritage or perish.”