Major General W.B.D.P. Fernando, Chief of Staff of the Sri Lanka Army speaking at the first ever United Nations High-Level Conference of Heads of Counter Terrorism Agencies of Member States at the United Nations Headquarters in New York today (29 June 2018) noted that as a country that had experienced first-hand the suffering of its people due to terrorism, Sri Lanka understands that a key pillar of counter-terrorism is prevention and addressing the root causes of conflict. 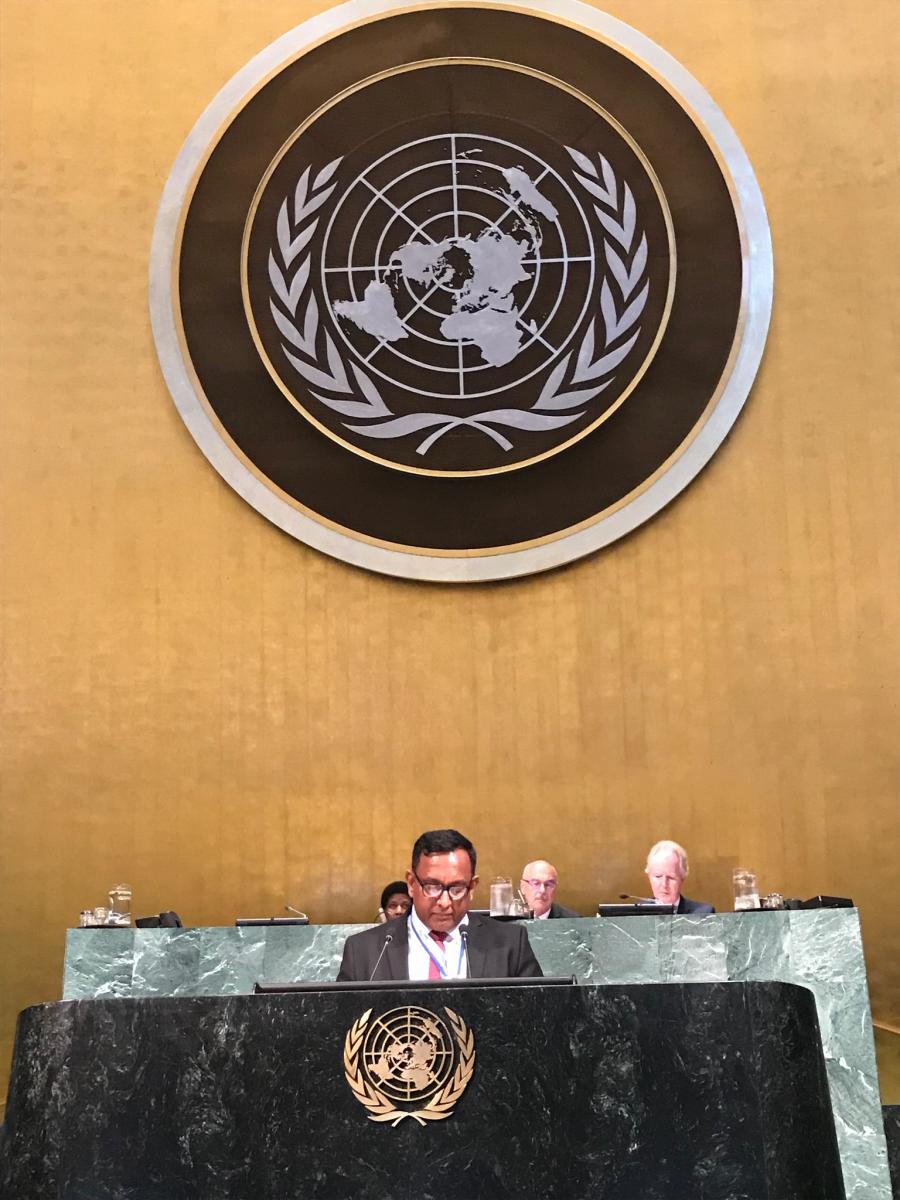 The historic Conference under the auspices of the United Nations was convened by Mr. Vladimir Voronkov, Under-Secretary-General of the newly established UN Office of Counter-Terrorism and engaged all thirty eight counter terrorism entities of the United Nations System. One of the aims of the Conference was to provide an opportunity to forge partnerships and increase cooperation and sharing of information among states. 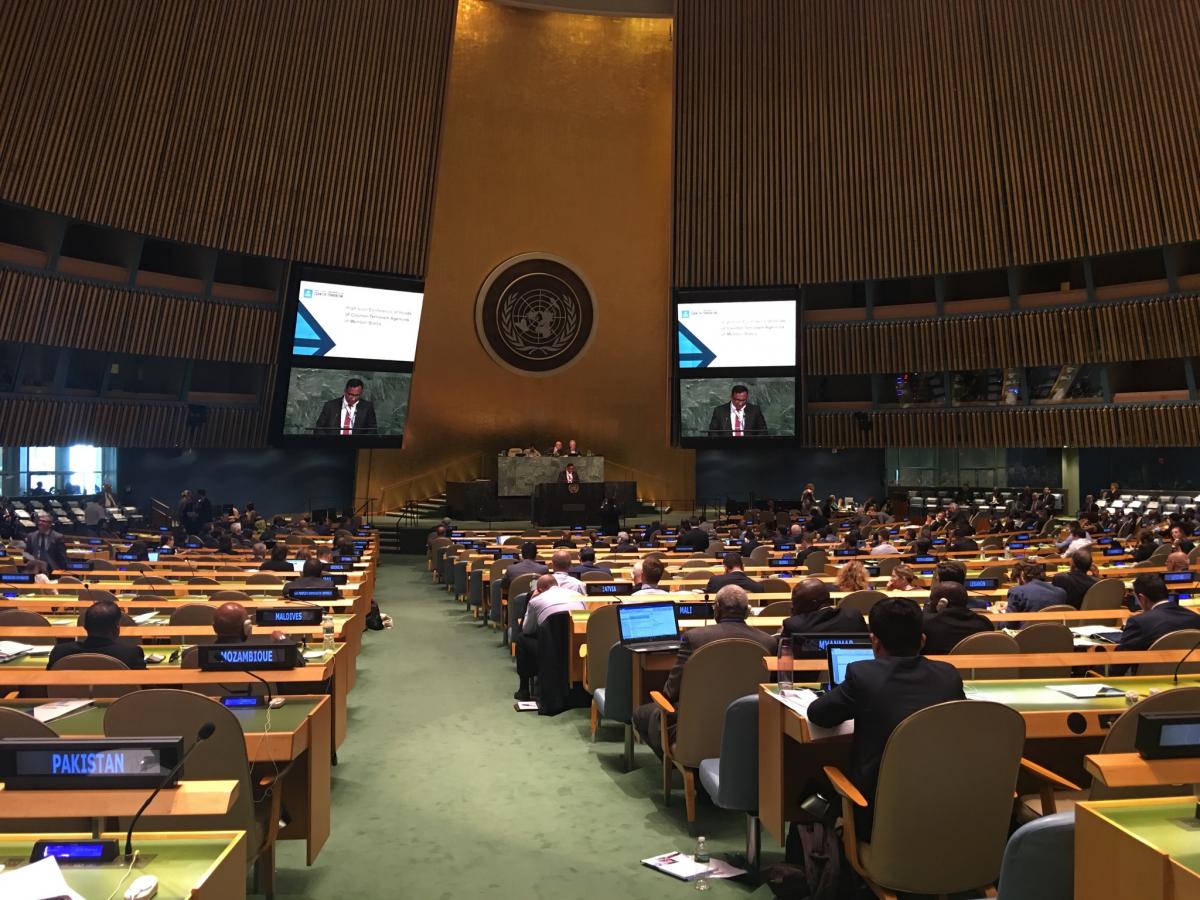 On behalf of my delegation, I would like to warmly congratulate the United Nations Secretary General and the Under-Secretary-General of the Office of Counter-Terrorism for convening this first ever High-Level Conference of Heads of Counter Terrorism Agencies.

These include the areas of counter-terrorism legislation; investigation, prosecution and adjudication of terrorism cases; prevention and suppression of terrorist financing; effectiveness of law enforcement agencies; border and immigration control; inter-agency coordination; international and regional cooperation in information-sharing; extradition and mutual legal assistance;  countering violent extremism and recruitment; rule-of-law based counter-terrorism measures, and respect for human rights.

Earlier this week, Member States concluded the sixth review of the Global Counter-Terrorism Strategy. When terrorism strikes it is an attack on all of us, and therefore it is incumbent for all of us to show solidarity and unity of purpose in combating this scourge. It is in this context that the Global Counter-Terrorism Strategy becomes essential as a rallying call to collective action.

As a country that once suffered under the yoke of terrorism for nearly thirty years, and successfully defeated this threat in 2009, Sri Lanka is acutely aware of the need for sharing information, technologies, databases, and intelligence in combating terrorism. Information sharing must take place between local state institutions and the police, and also on an international and cross-regional level. This must be an inclusive approach including all stakeholders.  Countering terrorism is not only an all of UN approach it must also be an all of country approach.

Today, we encounter many challenges as a result of the changing face of terrorism. Sri Lanka continues to be vigilant in this regard, as part of our counter terrorism initiatives.

In this backdrop, it is also important that we join forces to seek ways to prevent the abuse of social media tools, and preserve these democratic spaces as forums for dialogue and understanding instead.

As a country that experienced first-hand the suffering of its people due to terrorism, we understand that a key pillar of counter-terrorism is prevention, and in this respect, addressing the root causes of a conflict. It must also be noted that counter terrorism is as much about military strategy and intelligence as it is about winning hearts and minds.

Within our own borders, the threat of terrorism has declined significantly since the Sri Lankan military’s defeat of the LTTE in 2009. There have been no threats nor successful terrorist attacks in Sri Lanka since May 2009.

In this regard we welcome  UNSC Resolution 1373 (2001)  which allows for States to take the necessary steps domestically to prevent the commission of terrorist acts; deny safe haven to those who finance, plan, support, commit terrorist acts and provide safe havens. It is therefore essential, that in keeping with UN Conventions and Resolutions, including UNSC Resolution 1373 and the Terrorism Financing Convention that all measures be taken to prevent the abuse of Charitable Funds.

In closing, let me reiterate, that for a country like Sri Lanka, which has been so ravaged and devastated by conflict for nearly thirty years, and now treading a fragile yet determined path of peace, reconciliation and justice, it is vital that moderate voices are not drowned out by the megaphones of extremists that seek to manipulate a democratic system.