Sri Lanka’s non-resident High Commissioner to the Bahamas resident in New York, Kshenuka Senewiratne, presented credentials to the Governor General of the Commonwealth of the Bahamas, the Most Hon. Cornelius A. Smith, ON, on 4th March 2020 at the Government House in Nassau.

In her remarks following the presentation of the Letters of Credence, High Commissioner Senewiratne conveyed the warm greetings and best wishes of H.E. President Gotabaya Rajapaksa to the Governor General and observed that she was honoured to be Sri Lanka’s new envoy to the Bahamas. She reiterated the heartfelt condolences on behalf of H.E. the President and the Government of Sri Lanka on the devastation and loss of life caused by hurricane Dorian and expressed admiration at the resilience and fortitude displayed by the people of the Bahamas and the leadership provided by that government in the aftermath of this tragic event. 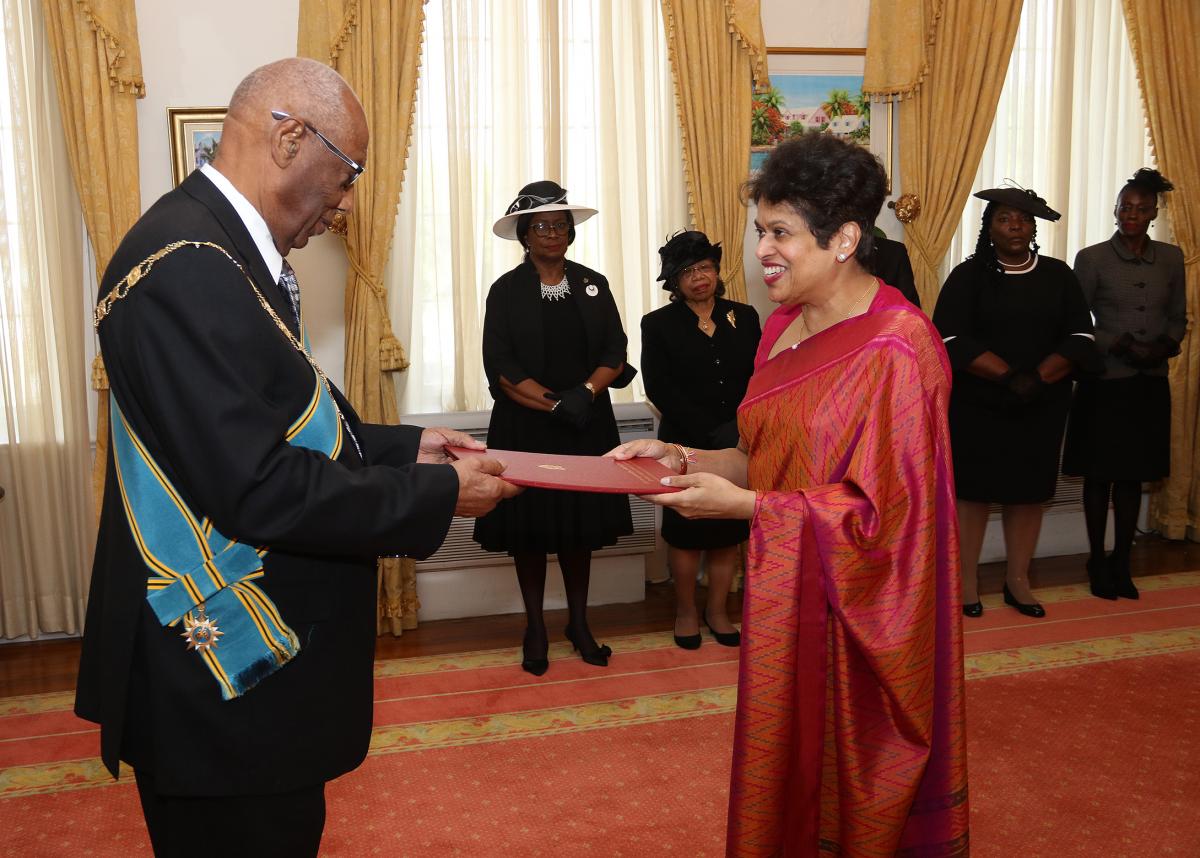 Sri Lanka’s High Commissioner to the Bahamas, Kshenuka Senewiratne presenting credentials to the Most Honourable Cornelius A. Smith, Governor General of the Commonwealth of the Bahamas on 4th March 2020 in Nassau.

The High Commissioner, referring to the extremely warm and cordial bilateral relations between the two countries, pledged to further expand these ties during her tenure. She highlighted the commonalities between the two nations, both being developing island states and being members of the Commonwealth, Group of 77 and China and the Non Aligned Movement. She noted that the two countries also share common challenges, being vulnerable to the impacts of climate change, including rising sea levels and adverse weather patterns.  Highlighting that both countries were currently seeking to rebuild their once vibrant tourism sector following the hurricane in the Bahamas and the Easter Sunday terror attacks in Sri Lanka, the High Commissioner stated that there were many lessons and best practices the two countries could share in re-energizing this sector in their respective countries. While also noting that trade between Sri Lanka and the Bahamas was negligible, she emphasized that there was greater potential to enhance trade ties and also strengthen co-operation in other areas including shipping, fisheries and agriculture.

Apprising the Governor General of the recent political developments in Sri Lanka, the High Commissioner informed that H.E. Gotabaya Rajapaksa had been elected as the 7th Executive President of Sri Lanka in November 2019, after receiving an overwhelming mandate from the people to charter a sustainable path of development for the country, follow a non-aligned foreign policy and find home grown solutions to overcome contemporary domestic challenges.

Considering that the Bahamas is a member of the UN Human Rights Council, she also updated the Governor General of Sri Lanka’s decision to withdraw from the co-sponsorship of resolution 40/1 and related resolutions on “Promoting reconciliation, accountability and human rights in Sri Lanka”, as conveyed during the Council’s 43rd session in Geneva. She stated that the Government was compelled to take this position considering some of the provisions in the resolution violate the country’s Constitution and the decision to co-sponsor had not been in keeping with domestic processes.

Concluding her remarks, the High Commissioner invited the Governor General to visit Sri Lanka at a mutually convenient time and thanked for the arrangements in hosting the rather small Sri Lankan community in the Bahamas, which has been making a contribution to the accounting and IT sectors.  She also encouraged the appointment of an Honorary Consul of the Bahamas in Sri Lanka, in keeping with such a representation in that country for Sri Lanka.

In his response, the Governor General congratulated the High Commissioner on her appointment and gratefully accepted the condolences extended to his country.  He informed that the Bahamas lamented with the people of Sri Lanka over the Easter Sunday attacks and stated that such an event highlights the incessant need to both combat terrorism and continuously promote peace.

Informing that the Bahamas places great value on the friendship between the two countries, the Governor General added that fostering such a relationship, both bilaterally and multilaterally would be mutually beneficial.  He added that it was more crucial than ever to work together for the mutual benefit of all peoples.  He acknowledged that Sri Lanka had been doing its part to counteract the impacts of climate change by undertaking initiatives to mitigate, adapt and build resilience and commended the Sri Lankan Government on its role in launching the Global Campaign on Sustainable Nitrogen Management.

The Governor General stated that the Bahamas looks forward to mutually beneficial collaboration, including knowledge exchange and technical cooperation, adding that Sri Lanka’s expertise in the agricultural industry would be most useful for his country.  He concluded by extending best wishes to H.E. President Gotabaya Rajapaksa, President for every success in his newly elected higher office and also conveyed his warm greetings to the people of Sri Lanka for lasting serenity, prosperity and happiness in the years ahead. 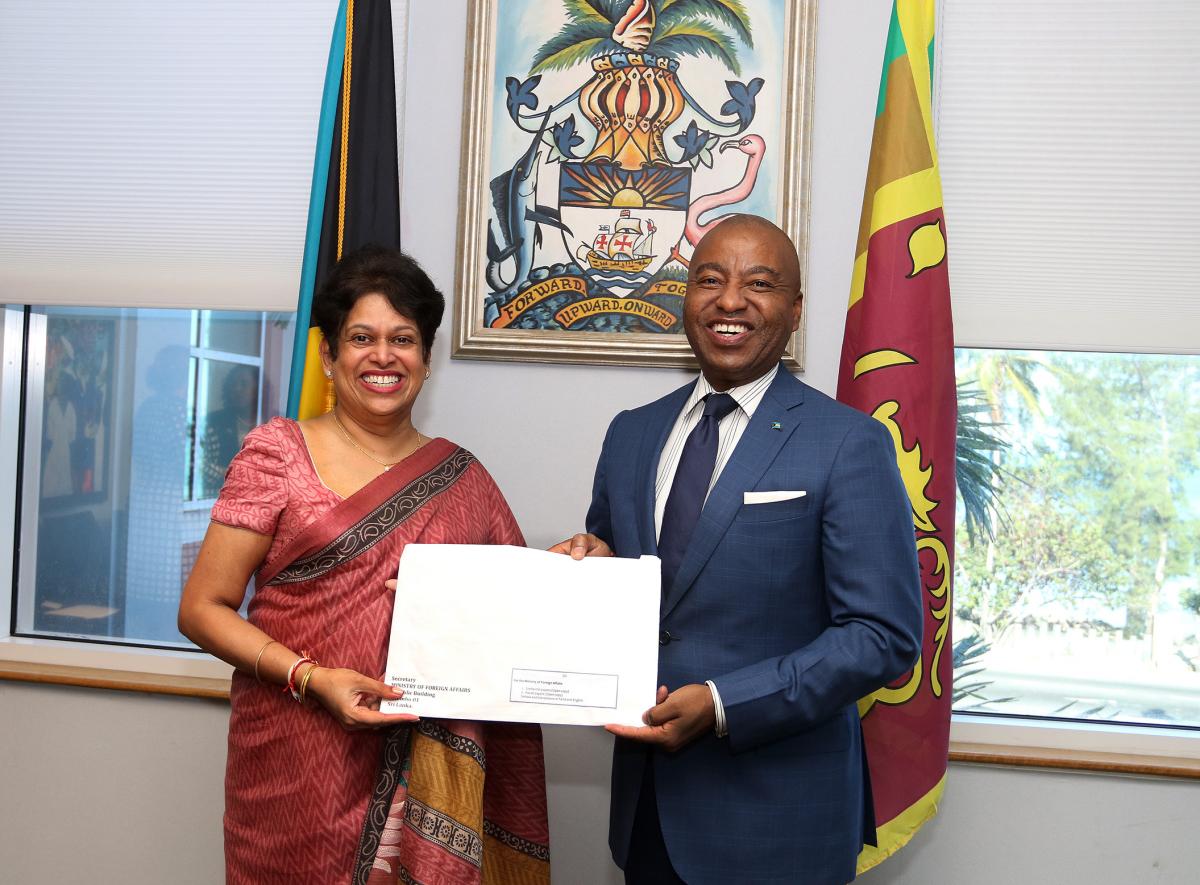 High Commissioner of Sri Lanka to the Bahamas, Kshenuka Senewiratne met with Hon. Darren Henfield, Minister of Foreign Affairs the Bahamas in Nassau on 4th March 2020. 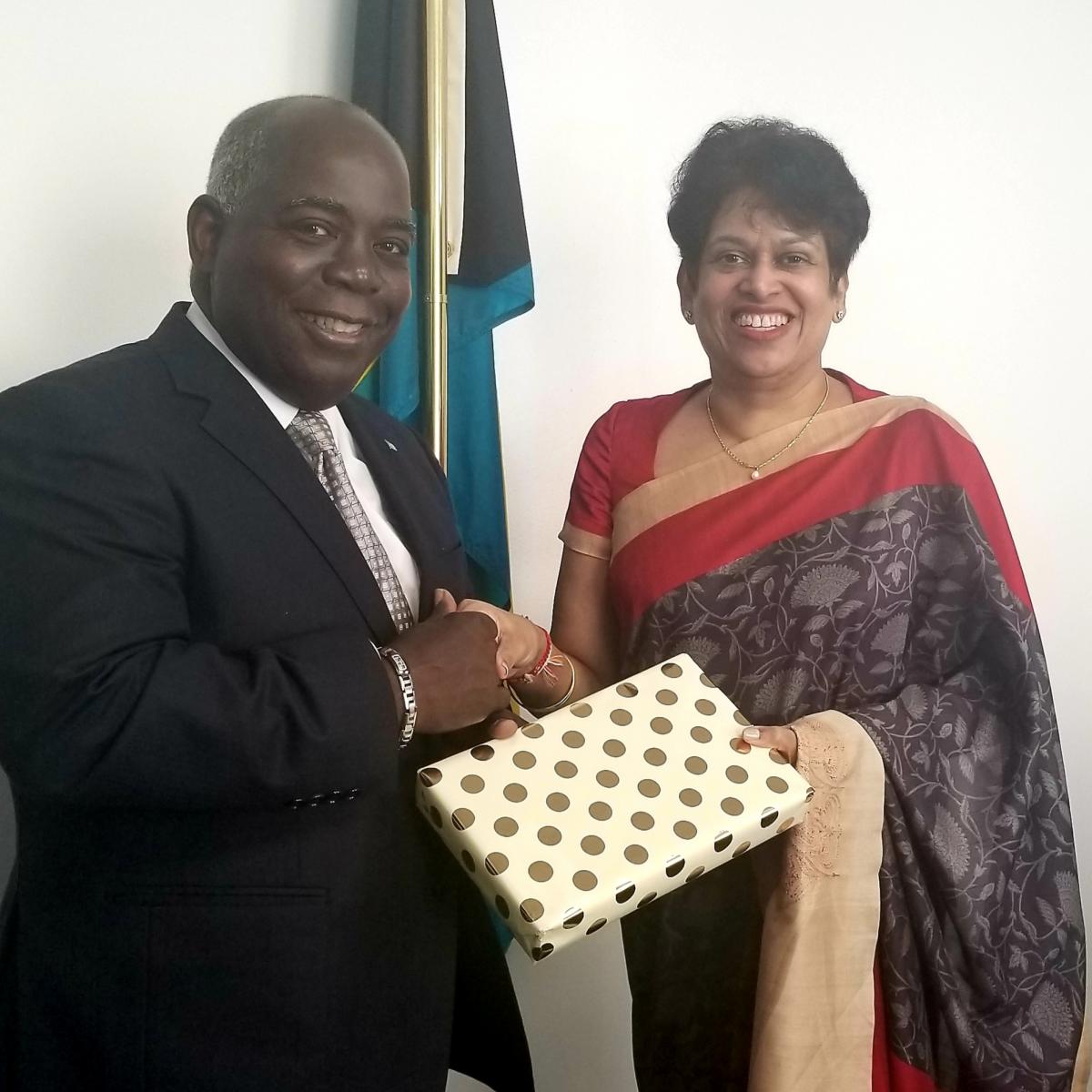 HE Kshenuka Senewiratne, High Commissioner of Sri Lanka to the Bahamas, met with Hon. Philip Davis, the Leader of Her Majesty’s Loyal Opposition of the Bahamas and Senator Frederick Mitchell on 5th March 2020 in Nassau

During her visit to the Bahamas, High Commissioner Senewiratne also paid courtesy calls on Hon. Darren Henfield, the Minister of Foreign Affairs, Hon. Elsworth Johnson, the Minister of Financial Services, Trade and Industry and Immigration, and Hon. Dionisio D’Aguilar, Minister of Tourism and Aviation.  She also met with Hon. Philip Davis, the Leader of Her Majesty’s Loyal Opposition, H.E. Huang Quingo, the Ambassador of China in his capacity as the Dean of the Diplomatic Corps and Mr. Jeffery Beckles, Chief Executive Officer and representatives of the Bahamas Chamber of Commerce.  The meetings provided the opportunity to identify areas of further bilateral cooperation. The High Commissioner concluded her visit by meeting with the Sri Lankan community in the Bahamas and reiterated the fullest cooperation and support from herself and the staff of the High Commission. 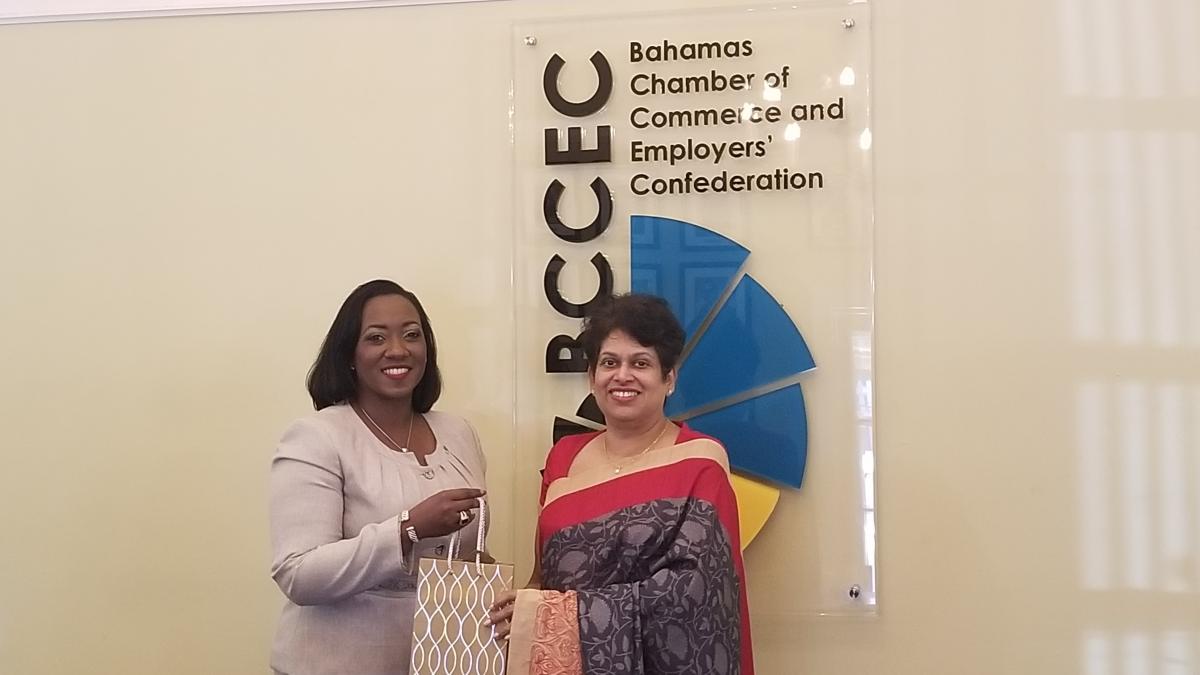 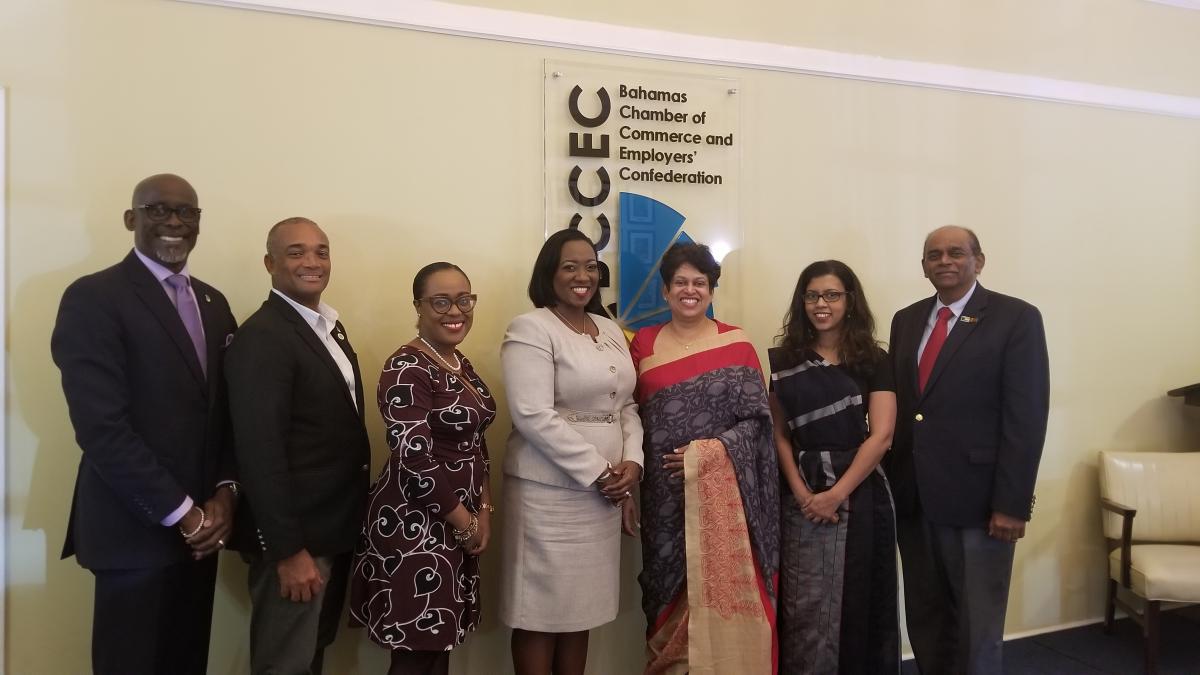 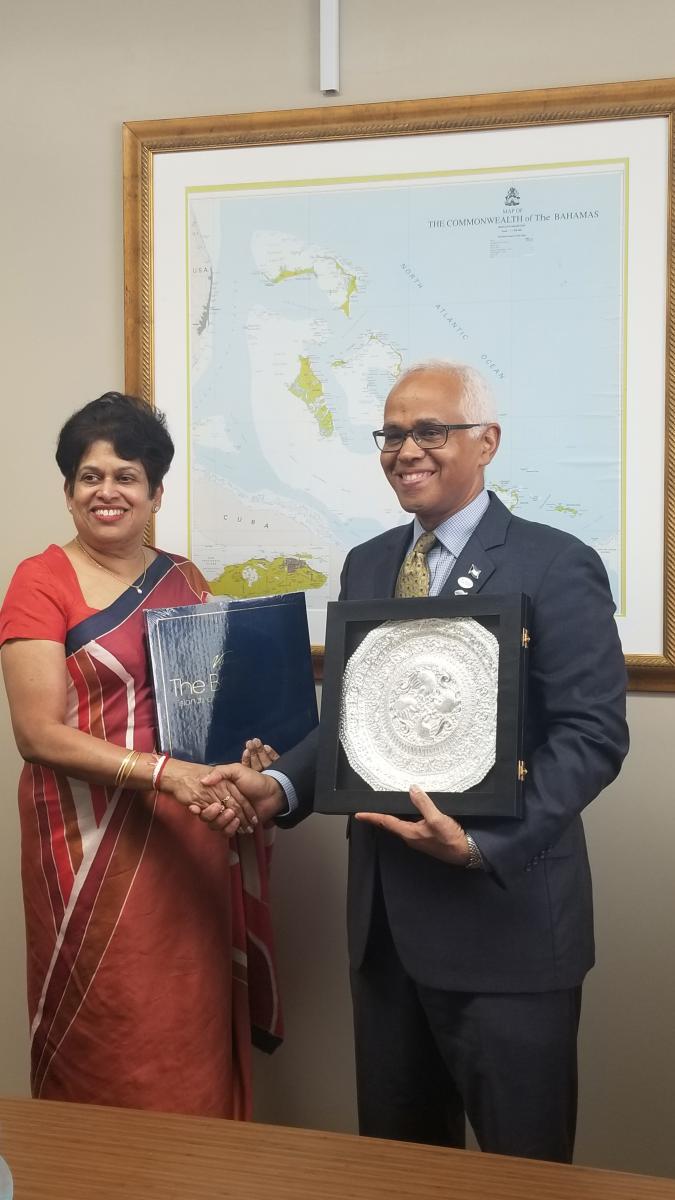 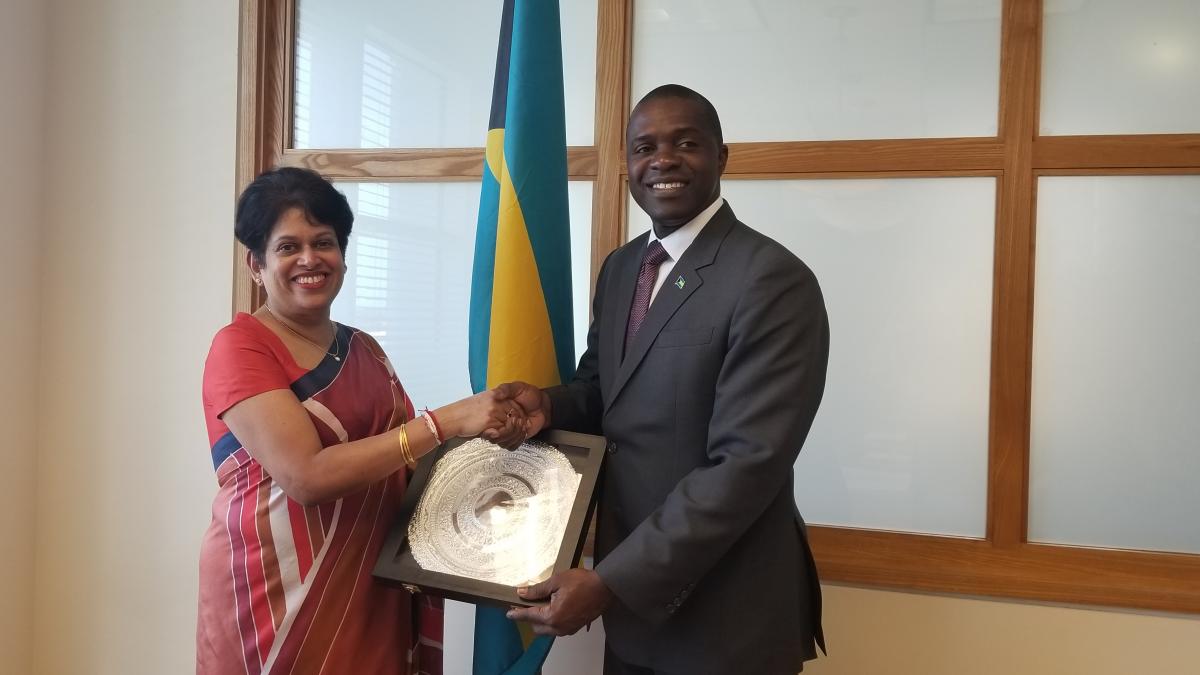 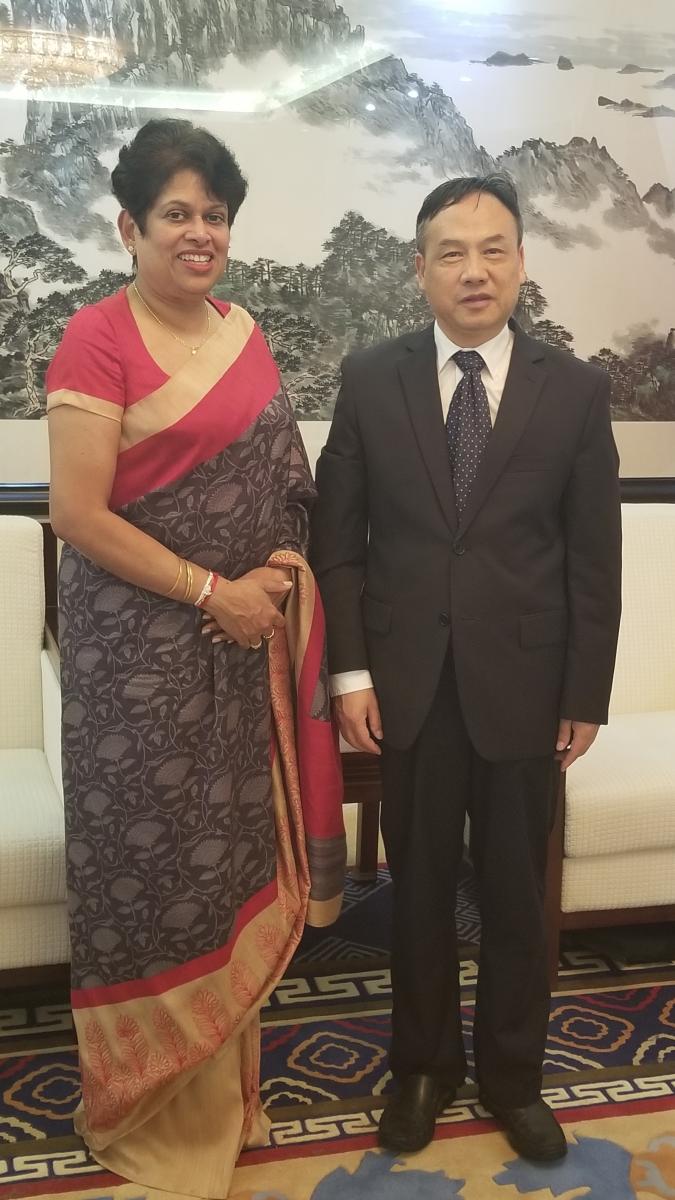 High Commissioner Kshenuka Senewiratne called on H.E. Huang Qinguo, Ambassador of China to the Bahamas and Dean of the Diplomatic Corps

High Commission of Sri Lanka to the Commonwealth of the Bahamas