A brief history of the items in your spice drawer 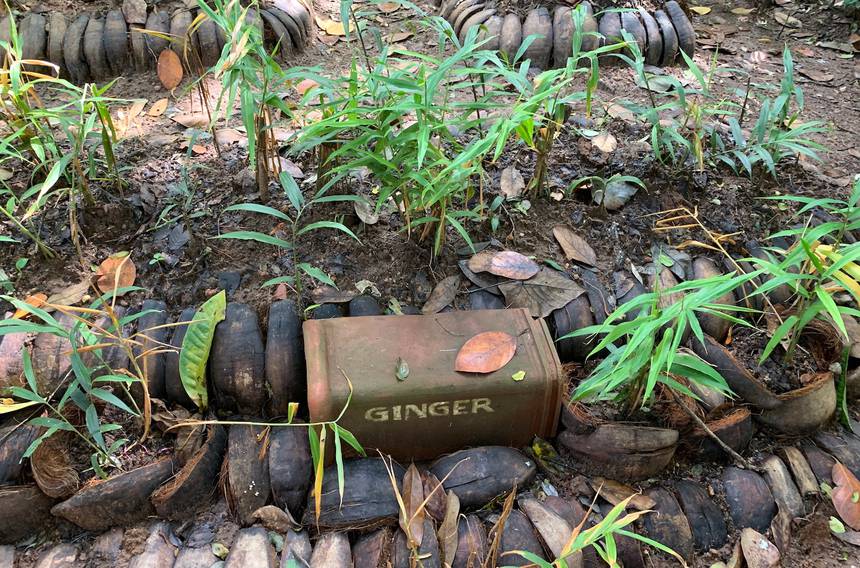 A visit to a Sri Lankan herb and spice garden reveals a rich history of trade and alternative medicine.

The drive to Luckgrove Herb and Spice Garden was a harrowing one. Our small bus narrowly missed getting rammed head-on by much larger public buses passing in the traditional Sri Lankan manner – moving into the middle of the winding mountain road and expecting all other vehicles to move out of the way. After too many near misses, we pulled into Luckgrove's parking lot, relieved to be on solid ground.

I needn't have worried about any potential injuries, however, because Luckgrove contains a cure for every imaginable mishap. After listening to our animated guide for an hour, I figured that, had I been carried in on a stretcher, not only would I have skipped out, but also seen wrinkles erased, energy boosted, and entire years added to my life.

Jokes aside, the tour was a fascinating glimpse into the history and dietary powers of herbs and spices that have become commonplace even in North American kitchens. Cinnamon, cloves, vanilla, and pepper, among others, are ingredients we reach for on a regular basis, and yet how often do we really give thought to where they come from and what their stories are? I'd like to share some of what I learned (although I cannot vouch for the healing powers). 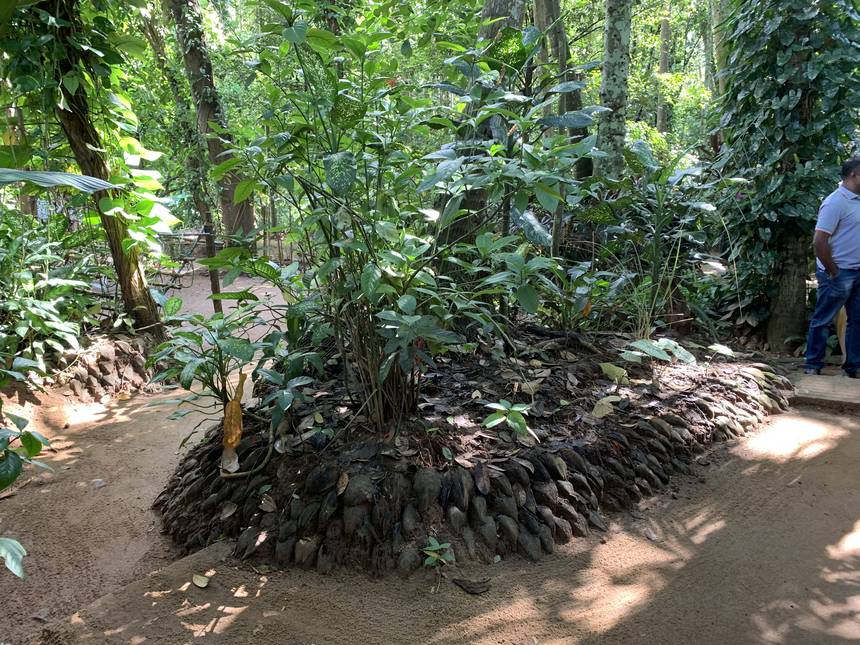 © K Martinko – The garden plots at Luckgrove are organic and lined with coconut husks that soak up water during the rainy season, then release moisture when it's dry.

Cinnamon is nearest and dearest to Sri Lanka's heart, the indigenous spice that first attracted Dutch and Portuguese traders from afar. Sri Lankan cinnamon is the best in the world, our guide said, and indeed its Latin name – Cinnamonum verum or 'true cinnamon' – would suggest the same. It has an older botanical name called Cinnamonum zeylanicum, which comes from Ceylon, Sri Lanka's former name. Perhaps it's easiest just to call it 'brown gold'. 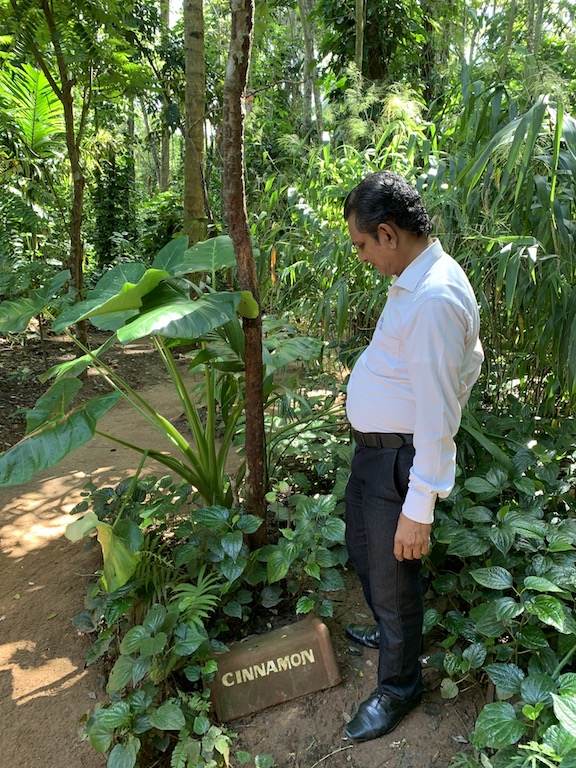 A cinnamon tree lives for 40 years and can be harvested three years after planting. From then on, it is harvested once annually by removing the bark in bands. True Sri Lankan cinnamon bark dries into curly pieces like bamboo. It crumbles under your fingertips, unlike the Chinese and Indonesian cinnamon that is hard as wood. Cinnamon bark can be ground or pressed for oil. This, the guide explained, is useful for drawing wax out of ears, rubbing onto cold feet to warm them, bleaching teeth, lowering blood sugar.

Other spices were brought to the island by European traders once they realized how perfect the growing conditions were. Vanilla came from Mexico but flourished here. It is a natural insect repellent, which is why no bees or butterflies pollinate it and all the work must be done by hand. The bean pods are dried for three months in the shade before being pressed for their extract. It takes 1 kilogram of vanilla beans (roughly 65 beans) to make a small vial of extract.

Lemongrass is also a natural insect repellent. It is planted in the soil ahead of tea crops to get rid of pests, and is used to make citronella cream.

Pepper is the king of spices, the guide announced. He showed us tiny green peppercorns growing at the end of branches. The pepper plant is a creeper vine that climbs up other trees, and different colored peppercorns all come from the same plant but have been processed in different ways. 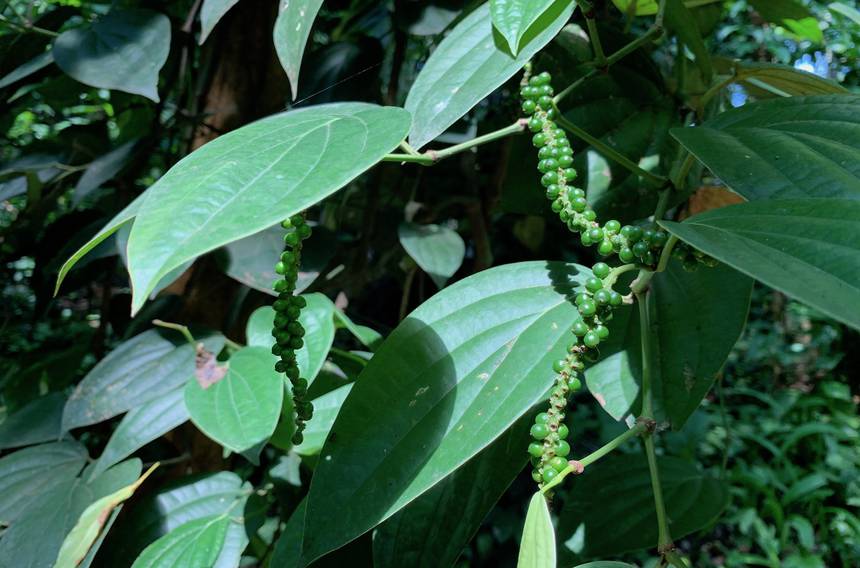 Beside the pepper vine was a cloves plant. Cloves, which originated in Zanzibar, grow at the end of a branch in clumps of 15. They are a natural anaesthetic and keep insects away, hence the age-old practice of stuffing oranges with cloves. (I thought it was because it smells great.) The wood from the cloves tree is rock-hard and perfect for building walking sticks and chess boards.

Nutmeg and mace come from the same plant. The nutmeg is the nut at the center of the fruit, the mace comes from the reddish skin surrounding the nut, and the apricot-like fruit is used locally for making jam. 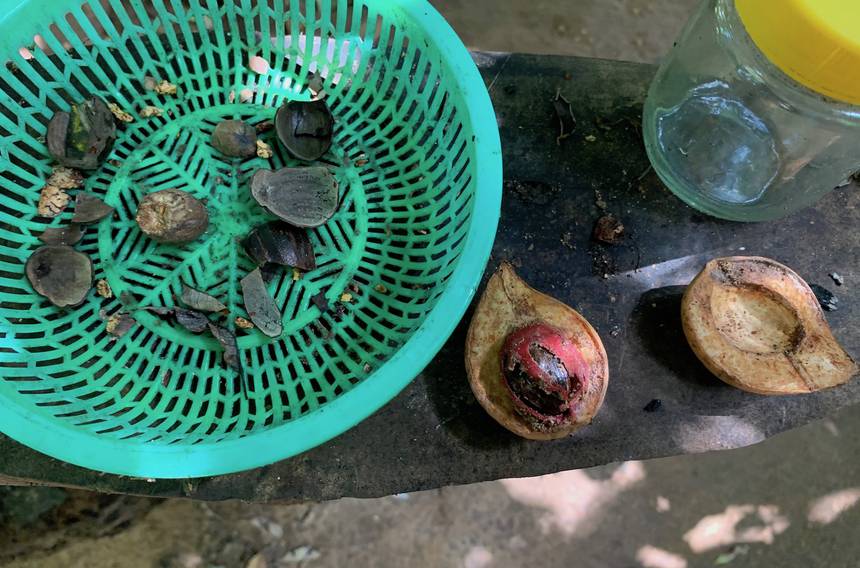 Turmeric and ginger are root crops. Both take nine months to mature, 'just like a baby,' the guide said. A single ginger plant will yield 3 kilograms of tubers. Turmeric is known as cheap saffron and a pinch is added to every curry in Sri Lanka to kill off germs. It has anti-inflammatory and antibacterial properties and is helpful for managing menopausal hot flashes. 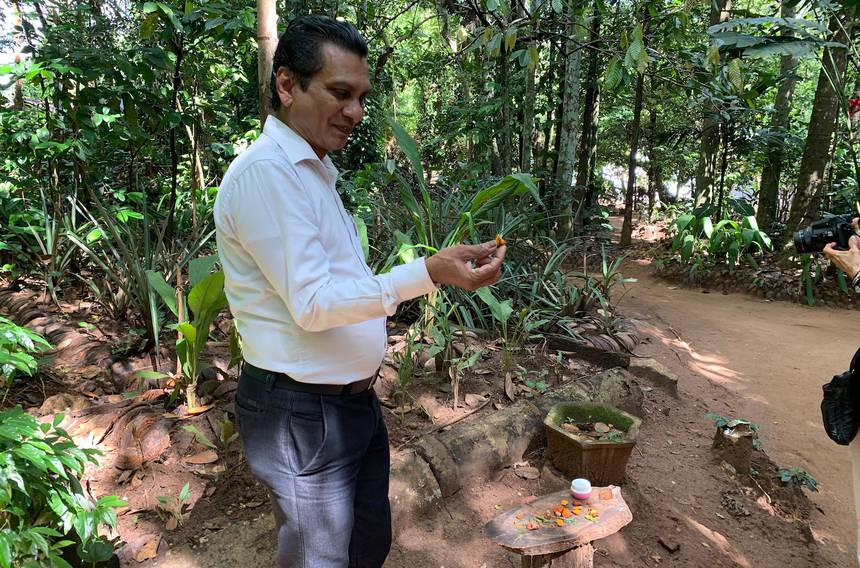 Not everything in the garden received the guide's praise. 'Don't eat pineapple more than once or twice a week,' he told us. It attracts insects and the acidity is hard on your bowels and teeth, bad for psoriasis. Then he pointed to a jackfruit and said, 'Any fruit that grows off a trunk is fattening. Think of bananas, coconut, even rice.' The lesson was to eat these in moderation.

'If pepper is the king of spices, what is the queen?' I asked. 'Cardamom,' he replied, and took me to see a cardamom plant on the far side of the garden. He showed me where the pods would form if it were the right season, but then I promptly stepped in some dog poo and the tour was over. Alas, there was no herbal or spice cure for that predicament, and I had to make do with a bucket of water.

The author is a guest of Intrepid Travel. There was no obligation to write this story.