The Mission celebrated Sri Lanka's 68th Anniversary of Independence with two events today.
​
At a solemn ceremony this morning, Sri Lanka’s Permanent Representative to the United Nations, Ambassador Dr. Rohan Perera hoisted the National flag in the presence of staff and well-wishers.

In keeping with the government’s commitment to post-conflict reconciliation efforts, and fulfilling one of the core recommendations of the Lessons Learnt and Reconciliation Commission, Sri Lanka’s National Anthem was played in full in both Sinhala and Tamil. The Independence Day messages of the President, Prime Minister and Foreign Minister were also read. 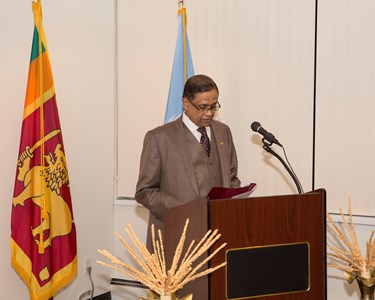 In an evening reception, the Mission hosted over 250 diplomats and high dignitaries of the United Nations to mark the occasion. Both the President of the General Assembly Morgens Lykketoft, and Deputy Secretary General Jan Eliasson, together with a large gathering of Permanent Representatives, members of the foreign press, including travel writers and promotional specialists were present.

The proceedings commenced with the national anthem again sung in both languages, marking a break with the past.

Ambassador Perera in his welcome address, said the mission was happy to celebrate the rich multiethnic, multicultural and multi religious diversity of our country, our long held traditions of tolerance and understanding, and our compassion towards all beings.

He also noted, that as one of the oldest democracies in Asia, this was a time to celebrate, not our past divisions, but recall and honor the spirit of unity that had prevailed in our land through the centuries.

In welcoming distinguished invitees and members of the foreign Press attached to the United Nations, Ambassador Perera noted, that Sri Lanka was celebrating two momentous events in her political history, and its 60 year relationship with the United Nations.

“Sri Lanka today celebrates her 68th anniversary of Independence from colonial rule. We do so at a most opportune time for our nation, as it emerges from a period of conflict that plagued us for over 27 years.

“In elections held in January 2015, our people embraced change, and mandated a return to good governance, democracy, respect for the Rule of Law, and positive engagement with the world community,” the Ambassador said.

“It is therefore in the backdrop of my country’s renewed commitment to multilateral engagement, with the United Nations at its core, that we are delighted to also continue to celebrate, the 60th anniversary of Sri Lanka’s admission to the United Nations, which fell on 14 December 2015,” he noted. 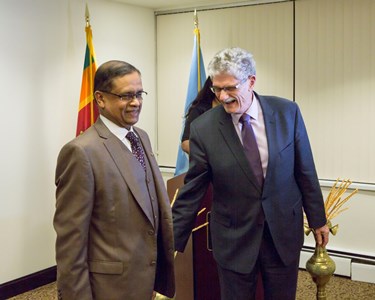 The President of the General Assembly Morgens Lykketoft in his address, congratulated Sri Lanka on its 68th anniversary of Independence and Sri Lanka’s positive interactions with the UN throughout the years.

“Our host, Ambassador Perera and his Mission, know all about working together in pursuit of the UN’s noble objectives.

“Despite challenges and upheavals domestically, Sri Lanka has consistently supported the work of the UN General Assembly, and played an important role as consensus builder on various issues, including on the draft comprehensive convention on terrorism (CCIT), Lykketoft said.

It was regrettable, he noted, that despite Ambassador Perera’s commendable efforts, member states had been unable to deliver concrete results on the CCIT.

The evening event featured archival Photographs on display throughout the mission building that told the unique story of Sri Lanka’s active involvement in the work of the UN, since its admission as a Member State.

A promotional video showcasing Sri Lanka as a combination of World Heritage sites, wildlife, history, rich culture, pristine beaches, and friendly people was continuously played on a large screen at the mission, mesmerizing those present with the natural beauty of the Pearl of the Orient.

The Mission will also hold an event at the Ukrainian Cultural Centre in New Jersey to mark the 68th anniversary of Independence for the wider Sri Lankan community, on Sunday 7th February, where over a thousand (1000) guests are expected to attend.  Buddhist, Hindu, Islamic and Christian religious ceremonies, and a cultural show reflecting Sri Lanka’s diversity and showcasing the talents of the children of the community will be one of the highlights of the event. United States Congressmen from the tristate area comprising New York, New Jersey and Connecticut will also be in attendance.