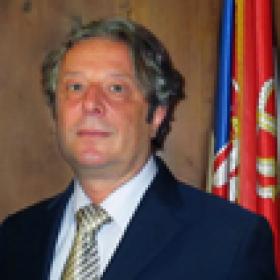 H.E. Mr. Milan Milanović
Ambassador Extraordinary and Plenipotentiary
Permanent Representative of the Republic of Serbia to the United Nations

Upon graduation from the School of Economics of the University of Belgrade, he joined the Foreign Service of the then Socialist Federal Republic of Yugoslavia in 1988.

Since 1988 to 1993, he was Attache and then Third Secretary in the Sector for Economic Affairs of the Ministry of Foreign Affairs.

Since 1993 to 1998, he served as Third and then Second Secretary in the Permanent Mission of the Federal Republic of Yugoslavia to the United Nations Office at Geneva.

Since 1998 to 2001, he was Deputy and then Acting Chef de Cabinet in the Office of the Minister of Foreign Affairs.

Since 2001 to 2005, he was First Counsellor for Economic Affairs in the Embassy of Serbia and Montenegro in Paris and its Representative to the Organization for Economic Cooperation and Development (OECD).

In 2005, he was appointed as Director of the newly established Department for the North Atlantic Treaty Organization (NATO) in the Ministry of Foreign Affairs with the rank of Minister Counsellor. In 2006, he was promoted to Ambassador at Large.

Prior to the appointment as Deputy Permanent Representative of the Republic of Serbia to the United Nations in New York in 2009, he served as Director of the Department for Partnership for Peace in the Sector for Security Policy in the Ministry of Foreign Affairs.

Welcome to the web site of the Serbian Mission to the United Natiions.

This web site is a dynamic instrument of communication that is shaped by daily events and updated by our operators. Whether we have achieved the purpose for which it was established will be known only if that dynamism is followed by your participation and consequent feedback. I am looking forward to reading your valuable suggestions and comments.

Thank you very much for your visit.