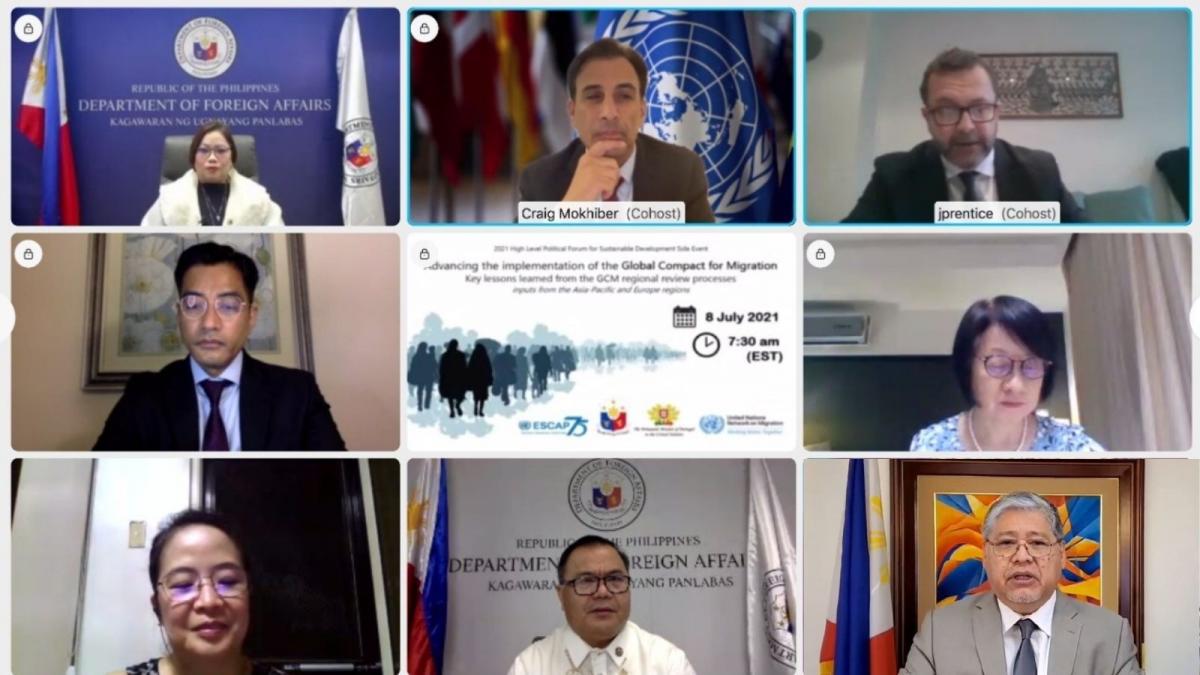 Permanent Representative Enrique A. Manalo of the Philippine Mission to the United Nations (bottom right) and Undersecretary Sarah Lou Y. Arriola (top left) of the DFA’s Migrant Workers Affairs Office are among the speakers at the UN side event on the Global Compact for Migration. Together with representatives from the Portuguese High Commission for Migration, UN ESCAP, Platform for International Cooperation on Undocumented Migrants, Asia Pacific Mission for Migrants, IOM, and ILO, they shared progress and lessons learned, and discussed way forward on implementing the Compact.

08 July 2021, New York — The Philippines promoted the rights of migrants by bringing together global migration policy leaders from Asia Pacific and Europe at a UN side event today. Together with Portugal, the UN Economic and Social Council for Asia and the Pacific (ESCAP), and the UN Network on Migration, the Philippines co-hosted the event “Advancing the implementation of the Global Compact for Migration: key lessons learned from the GCM regional review processes – inputs from the Asia-Pacific and Europe regions at the sidelines of the UN High Level Political Forum.

In his opening remarks, Ambassador Enrique A. Manalo of the Permanent Mission of the Philippines to the UN in New York reiterated the Philippines’ steadfast support for the Global Compact for Migration and the promotion and protection of the human rights of migrants. “The positive contributions of migrants have helped promote sustainable development in countries of origin, transit and destination. During the time of the pandemic, many countries relied on migrant medical and health personnel as front-line workers,” Amb. Manalo said.

Undersecretary for Migrant Workers Affairs Sarah Lou Arriola of the Department of Foreign Affairs (DFA) shared lessons learned from the GCM Asia Pacific Review, which she chairs. There is wide acknowledgement from all sectors and stakeholders that migrants need social protection and other measures for inclusion during a crisis such as the COVID-19 pandemic. Some good practices identified were support for voluntary repatriation of distressed citizens, extension of stay and work permits, and increased consular assistance.

With regard to repatriation, the DFA has been relentless in bringing home its citizens, and in 2020 alone, it facilitated the repatriation of a total of 327,511 overseas Filipinos.

Undersecretary Arriola highlighted the Philippines’ role in crafting the GCM, stating that “the Philippines lobbied for the inclusion of decent work and fair and ethical recruitment provisions, as inspired by Target 8.8 of the Sustainable Development Goals.” She said that the effort was successful, as “decent work and fair and ethical recruitment provisions are now codified under Objective 6 of the GCM.” She also highlighted the global partnerships forged by the Philippines with Saudi Arabia and Bahrain to support groundbreaking efforts to reform their respective labor systems.

Assistant Secretary Enrico Fos of the DFA outlined the Philippines’ national efforts to implement the GCM and linked it to the achievement of the 2030 Agenda for Sustainable Development. He also stressed that the COVID-19 pandemic presented new challenges, but the GCM was a useful blueprint that facilitated the repatriation of over a million migrant Filipinos.

The side event featured statements of Mr. Eduardo Qua, Head of International Relations at the Portuguese High Commission for Migration, and Mr. Ola Henrikson, Regional Director of the International Organization for Migration in Brussels, who shared key lessons from the GCM review in the Europe region.

Partnerships with civil society for the promotion and protection of migrants’ rights was stressed at the event by civil society representatives Michelle LeVoy of the Platform for International Cooperation on Undocumented Migrants (PICUM) and Mr. Rey Asis of the Asia Pacific Mission for Migrants. Mr. Craig Mokhiber of the Office of the High Commissioner for Human Rights moderated the event. - END