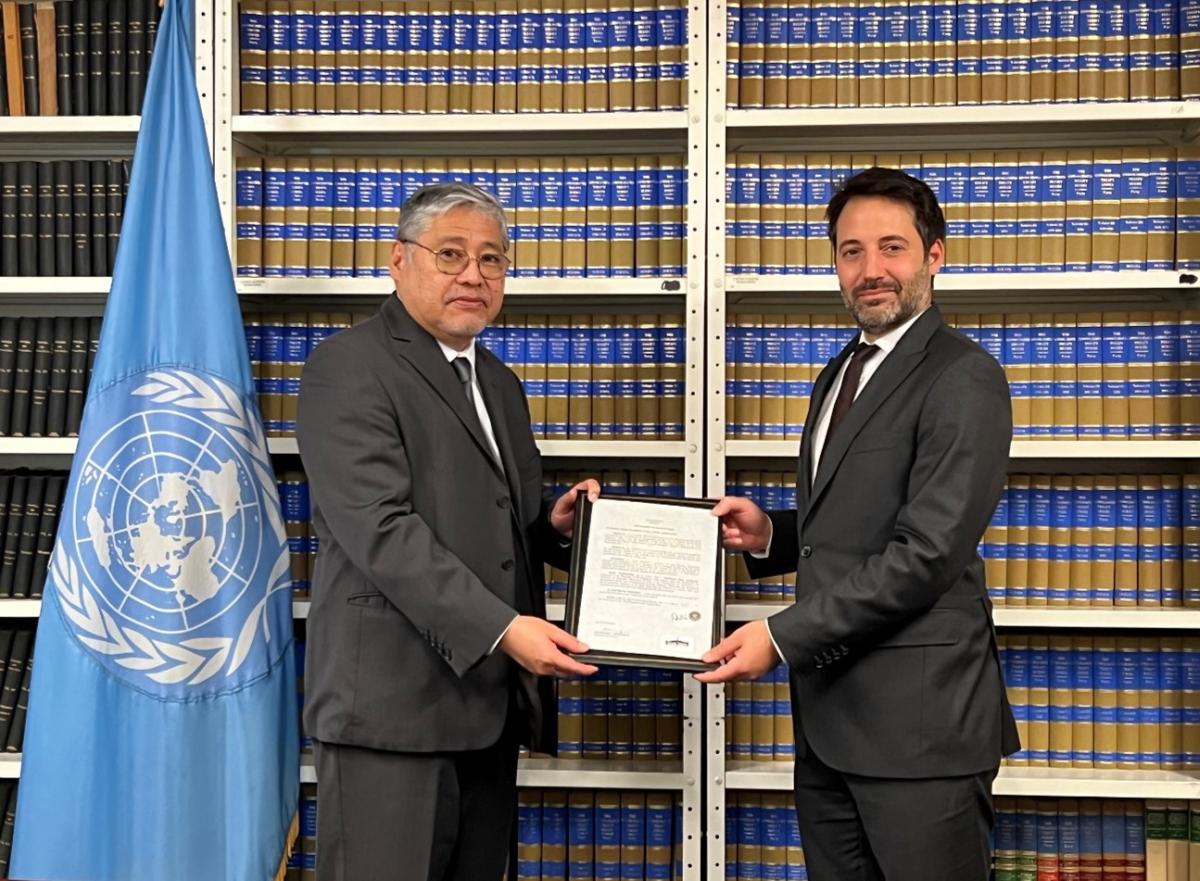 Permanent Representative to the United Nations Ambassador Enrique A. Manalo deposits the instruments of ratification of the Amendment to Article 1 and Protocol V on Explosive Remnants of War to Mr. David Nanopoulos, Chief of Treaty Section at the United Nations Office of Legal Affairs’ Treaty Signing Room.

UNITED NATIONS, NEW YORK, 10 May 2022 - Ambassador Enrique A. Manalo, Permanent Representative to the United Nations, deposited the instruments of ratification of the Amendment to Article 1 and Protocol V on Explosive Remnants of War to the Convention on Prohibitions or Restrictions on the Use of Certain Conventional Weapons which may be Deemed to be Excessively Injurious or to have Indiscriminate Effects (Convention on Certain Conventional Weapons or CCW), at the Treaty Signature Room of the United Nations.

Ambassador Manalo handed over the two instruments to Mr. David Nanopoulos, Chief of the Treaty Section, Office of Legal Affairs of the United Nations.

The Convention on Certain Conventional Weapons bans or restricts the use of specific types of weapons that cause unnecessary or unjustifiable suffering to combatants or to affect civilians indiscriminately. The Convention, including three annexed protocols, was adopted on 10 October 1980 and entered into force on 2 December 1983.

President Rodrigo Roa Duterte signed the instruments of ratification of the Amendment to Article 1, and Protocol 5 on 12 April 2022.

The Amendment to Article 1 of the Convention expands the applicability of CCW to non-international armed conflict without changing the legal status of rebel groups to that of privileged belligerents.

Protocol V addresses the humanitarian problems caused by unexploded and abandoned ordnances. The Protocol, which is the first multilaterally negotiated instrument to deal with the problem of unexploded and abandoned ordnance, is intended to eradicate the daily threat that such legacies of war pose to populations in need for development and to humanitarian aid workers operating in the field to help them.