GA adopts PH-sponsored resolution on combatting human trafficking, including in the context of the COVID-19 pandemic 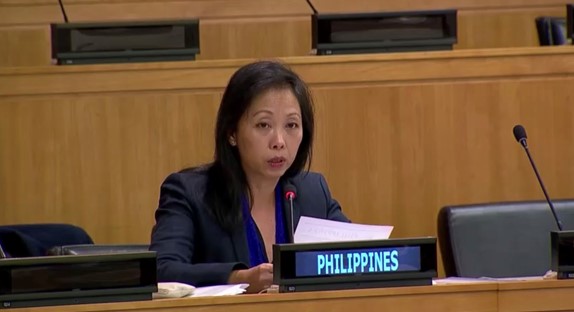 Philippine Deputy Permanent Representative to the United Nations Kira Christianne D. Azucena introduces the Philippine-sponsored resolution “Trafficking in women and girls” at today’s session of the Third Committee of the General Assembly today.  The Committee adopted the resolution by consensus.

New York, 16 November 2020 – The Third Committee of the General Assembly at its 75th session adopted by consensus today the resolution tabled by the Philippines titled “Trafficking in women and girls.”

The resolution, which was co-sponsored by 92 States across all regions, urges Governments to ensure that the treatment of victims of human trafficking is conducted with full respect for the human rights even during the COVID-19 pandemic.

In introducing the resolution, which the Philippine Permanent Mission to the UN has been facilitating bi-annually since 1995, Deputy Permanent Representative Ambassador Kira Christianne Azucena stressed that the subject of human trafficking, especially of women and girls, was a priority of the Philippines.

“We recognize that the pandemic and its widespread social and economic effects are increasing the vulnerability of women and girls to human trafficking, and other forms of exploitation and abuse, including that of children, has significantly increased as a result of lockdowns and restrictions imposed by authorities to stem the spread of the virus,” Ambassador Azucena said.

The resolution demonstrates the Philippine government’s high priority on the promotion of the welfare of all Filipinos, including the vulnerable and marginalized, and its continued strong advocacy against trafficking in persons in the United Nations.

The resolutions adopted in the Third Committee will be forwarded to the General Assembly Plenary for its final adoption in December.

The recording of the introduction of the resolution is accessible via https://youtu.be/RISxJM2JP3A.  END