“Peace by Piece”: Secretary Dureza shares the Philippine experience during the UNGA’s High-Level Meeting on Peacebuilding and Sustaining Peace 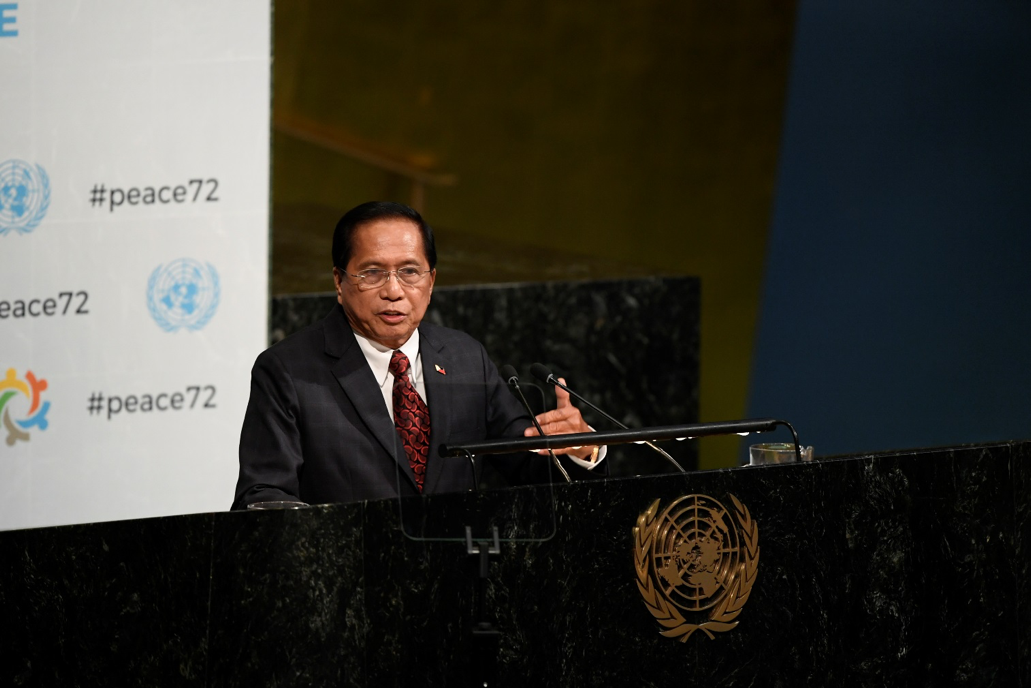 Secretary Jesus G. Dureza, Presidential Adviser on the Peace Process, addresses the UN General Assembly during the 2018 High-Level Meeting on Peacebuilding and Sustaining Peace held at the General Assembly Hall, UNHQ, on 24 April 2018

24 April 2018, New York City – Secretary Jesus G. Dureza, Presidential Adviser on the Peace Process, shared the Philippine experience on the peace process during the 2018 High-Level Meeting (HLM) on Peacebuilding and Sustaining Peace held at the UN General Assembly from 24 to 25 April 2018.

In his statement delivered before the General Assembly, the Secretary stressed that the Philippine Government, through the Office of the Presidential Adviser on the Peace Process or OPAPP, approaches peacebuilding in a number of ways, all aligned with the UN’s vision of sustaining peace by taking all segments of the population into account.

“As OPAPP creates an inclusive approach to peace through our tables, we also recognize that achieving peace means sharing the peace equity with the bigger peace table – the general public. The peace process doesn't’t end with the signing of the peace agreement. The process ends when every Filipino owns and believes in the process altogether,” the Secretary explained during the interactive dialogue.

“Peace by piece, we will succeed,” the Secretary said.

The Secretary also affirmed that preventing conflict was the better way to build and sustain peace.

“We strongly welcome the efforts of the United Nations ‘to sustain peace that are necessary not only conflict had broken out, but long beforehand through prevention of conflict and addressing its root causes’,” Secretary Dureza said.

The Secretary also expressed the Philippine Government’s grateful appreciation to all the partners, particularly the UN Peace Building Fund “which contributed immensely in strengthening the gains of the Mindanao peace process and in preventing violent extremism.”

The President of the 72nd Session of General Assembly, H.E. Miroslav Lajčák, hosted the HLM with the overarching objective “to assess efforts undertaken and opportunities to strengthen the United Nations’ work on peacebuilding and sustaining peace.”

The two-day meeting consisted of an opening and high-level segment, a high-level lunch, a plenary debate, four (4) interactive dialogues and a closing segment. Secretary Dureza attended Interactive Dialogue II: “Strengthening the United Nations Work on Peacebuilding and Sustaining Peace in the Field” which was moderated by Ms. Ameerah Haq, former Under-Secretary-General of the UN Department of Field Support (DFS) and Vice-Chair of the Independent Panel on Peace Operations.

On the second day of the HLM, the General Assembly adopted by consensus the draft resolution on Follow-up on the Secretary-General’s Report on Peacebuilding and Sustaining Peace, which “requests the Secretary-General to present to the General Assembly, during its 73rd session, an interim report further elaborating on his recommendations and options, including those on financing for United Nations peacebuilding activities.”

During the HLM, UN Secretary-General António Guterres emphasized that the central message of his report on peacebuilding and sustaining peace is that “we need to enhance the coherence of international efforts in support of national governments and their people.”  “To achieve greater coherence,” Mr. Guterres said that “we are strengthening partnerships around all our efforts, and at every stage along the peace continuum from conflict prevention and resolution to peacekeeping, peacebuilding and long-term development.”

At the closing segment of the HLM, PGA H.E. Lajčák cited, among others, the Philippine experience in peacebuilding, stating that “Lessons from the Philippines showed us the need to complement – rather than replace – national cultures, sensitivities and policies.”

Over 120 Member and Observer States delivered their respective interventions during the High-Level Meeting, including five (5) Heads of States and Governments (HOS/HOGs) and more than 40 Ministers and Vice Ministers. END