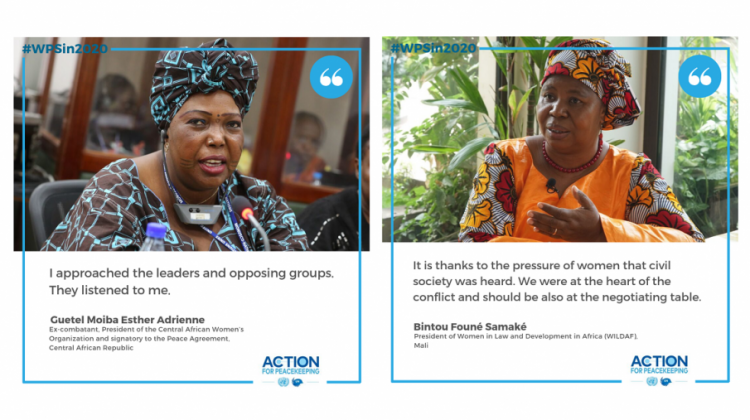 The Department of Peace Operations (DPO) hosted the event “Women Lead Political Solutions to Sustain Peace” on 26 September on the side-lines of the General Assembly high-level week.

The event addressed good practices and progress on women’s meaningful, full and equal participation in peace processes and political solutions, which is a priority political commitment in the Secretary General’s Action for Peacekeeping (A4P) Initiative.

It was organized in partnership with the Permanent Missions of Canada and of the United Kingdom to the UN, and the Government of the Central African Republic (CAR).

The role and contributions of women leaders and women’s organisations in recent and ongoing peace processes in CAR, Mali and South Sudan were profiled.

A video, Women Transforming Peace, was launched with a policy brief and a booklet featuring the stories of women from the above-mentioned countries.

At the event, Under-Secretary-General for Peace Operations Jean-Pierre Lacroix, Under-Secretary-General and UN Women Executive Director Phumzile Mlambo-Ngcuka, Central African Minister for the Advancement of Women, Family and the Protection of Children Aline Gisele Pana, and Mama Koité Doumbia, President of the Mali Women’s Platform, participated in a panel discussion.

It was moderated by Melanne Verveer, who heads the Georgetown University Institute for Women, Peace and Security.

Panellists agreed that there was a need to replicate recent successes on women’s participation. For example, women, including ex-combatants, were formally involved in the African Union-led peace negotiations in the Central African Republic for the first time in 2019.

In South Sudan, the Revitalized Peace Agreement contains specific gender provisions, including a 35% quota for women in the transitional government.

Participants said that support from peacekeeping missions and other partners on the ground proved critical in helping women reach these goals and pave the way for inclusive and sustained peace. The fight for direct participation needs to be stepped up as women are often at the periphery of formal and national peace mechanisms and government structures.

This event was organised as part of a series of events marking the 20th anniversary since the adoption of Security Council resolution 1325 (2000) on Women, Peace and Security, which seeks to strengthen the delivery of the women, peace and security agenda.