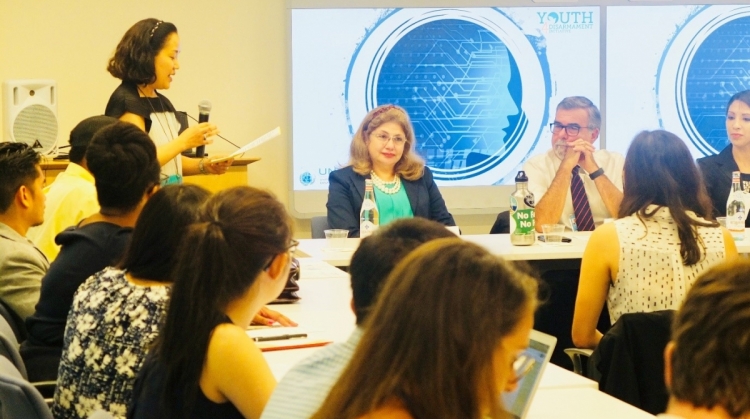 The objectives of the Youth4Disarmament initiative are to provide knowledge and skills to young people and to empower them to make their own contributions as national and world citizens.

The first event, held on 16 August, brought young people to UN Headquarters to join an expert-led discussion on the implications of artificial intelligence for international peace and security. It was also organized for International Youth Day.

The participants were welcomed by Thomas Markram, Director and Deputy to the High Representative for Disarmament Affairs, who spoke about the importance of youth engagement to the Secretary-General’s Agenda for Disarmament, and about young people as a fundamental force for change.

Chris King, head of UNODA’s Science and Technology Unit, addressed the (elusive) definition of AI and explored AI’s military applications and implications for warfare. He highlighted the potential impact of AI on strategic stability and nuclear command-and-control systems, the proliferation risks, and the ethics of delegating life-or-death decisions to machines.

As a member of the scientific community and Director of Scientists Against Inhumane Weapons, Future of Life Institute, Emilia Javorsky described the role of scientists in informing policymakers and the public to ensure new technologies are rolled out in a manner that is beneficial - and not harmful - to society. She gave the example of the discussion about lethal autonomous weapons systems and the struggle against the weaponization of AI.

Eleonore Pauwels, Research Fellow on Emerging Cybertechnologies, AI and Genomics at the United Nations University, focused on AI’s “amplifier/enabler” role. She described potential security risks associated with cyber-AI, AI-biotechnology and AI-additive manufacturing, and explained how developments in these areas would fundamentally alter the nature of warfare.

The young people were interested in topics such as modes of governance, roles of non-military companies, and the core skills that should be taught to thrive in a technology-driven future.

Soo Hyun Kim, focal point for Youth Engagement at UNODA’s Regional Disarmament, Information and Outreach Branch, advocated that young people get involved in the AI conversation and shape the future they will live in.