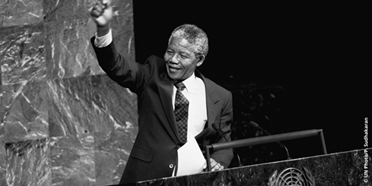 The Prize was established in June 2014 by the UNGA to recognize the achievements of those who dedicate their lives to the service of humanity by promoting the purposes and principles of the UN while honouring and paying homage to Nelson Mandela’s extraordinary life and legacy of reconciliation, political transition, and social transformation.

The Award is presented every five years to two individuals: one female and one male.

It is expected that the laureates will be announced in May 2020, with the prizes awarded at United Nations Headquarters in New York during the commemoration of Nelson Mandela International Day, marked on 18 July.

Nominations will be accepted until 28 February 2020 and can be submitted via an online nomination form in English or French at: http://bit.ly/2oYYt3M [English] or http://bit.ly/2OSPg7v [French]

First awarded in 2015, the Prize recognized two outstanding individuals: Dr. Helena Ndume of Namibia, an ophthalmologist whose life’s work has been the treatment of blindness and eye-related illnesses, both in Namibia and throughout the developing world; and former President of Portugal, H.E. Mr. Jorge Fernando Branco Sampaio, a leader in the struggle for the restoration of democracy in his country.

It is expected that the laureates will be announced in May 2020, with the prizes awarded at United Nations Headquarters in New York during the commemoration of Nelson Mandela International Day, marked on 18 July.

Details on submission of nominations can be found at https://www.un.org/en/events/mandeladay/mandela_prize_2020.shtml.

Once every five years, commencing in 2015, an honorary award will be presented as a tribute to the outstanding achievements and contributions of two laureates: one female and one male who shall not be selected from the same geographic region.

In recognition of the humility of Nelson Mandela, the Prize awarded to each winner is a plaque engraved with an appropriate citation and a relevant quotation.

Written nominations for the Prize may be received from the following:

1) Governments of Member States and observer States of the United Nations; 2) Entities and intergovernmental organizations having received a standing invitation to participate as observers in the sessions and work of the General Assembly and the Economic and Social Council; 3) Institutions of higher education, in particular universities and other educational establishments, which provide a programme of education beyond secondary education, grant post-secondary degrees and are approved and/or accredited as institutions of higher education by the competent authorities of Member States, as well as independent research centres and institutes that are engaged in dedicated service to humanity, the promotion of reconciliation and social cohesion, and community development; 4) Non-governmental organizations in consultative status with the Economic and Social Council; 5)Laureates of the Prize, unless they are currently serving on the Committee.

For additional information and media requests, please contact send an e-mail to mandelaprize@un.org