New runway is open for service in Gao, Mali 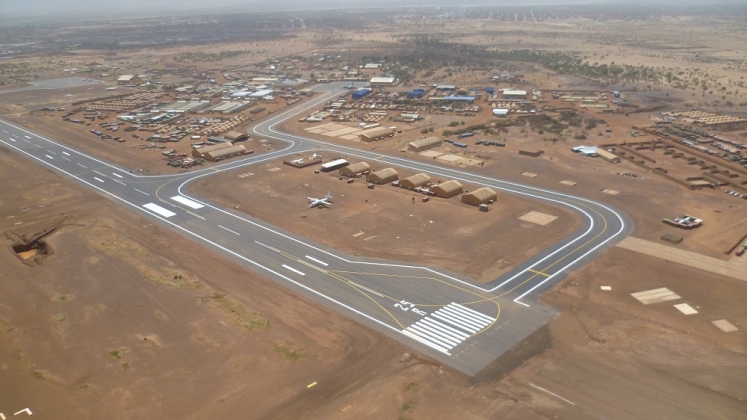 In late June 2018, UNO-053P, an ATR-72 twin-engine turbo-prop regional airliner adorned in the familiar white and black livery of the UN Department of Field Service (DFS) Aviation, took off just beyond the runway, on the freshly paved and painted asphalt of a newly minted airstrip in Northern Mali, and in doing so, provides tangible results of a successful UN project.

A month earlier, just before the late July completion of the long planned and urgently engineered Gao runway project, such a smooth arrival would have been impossible.

The United Nations Multidimensional Integrated Stabilization Mission in Mali (MINUSMA) completed this ambitious multi-year, 30-million-dollar project after overcoming a range of administrative, environmental, political and financial barriers which stood in the path. Support for the project was made possible by numerous commercial partners, Member States, and the engagement of the International Civil Aviation Organization (ICAO).

No other runway project in the history of UN airport and infrastructure development has approached the size and cost of this ambitious construction effort, and involved such a wide range of international stakeholders, all taking place in one of the most dangerous environments in peacekeeping.

The previous landing strip had deteriorated to the point that safety had become a major concern, and by early 2016 the need for a new runway quickly became an urgent requirement. To lose the ability to reach Gao by air would have been disastrous for the overall mission and mandate delivery, leaving this critical hub isolated and severing essential lines of support for troop rotations, supplies, mission staff, and medical evacuations.

Instead, the newly laid runway, taxiways, and ramps, supported by concurrently installed lighting system and enhanced through satellite-based instrument approaches, provides for 24/7, all-weather operations to a full range of international operators. Without the tireless multi-year efforts of a wide range of MINUSMA, HQ, ICAO and other international aviation and engineering professionals, the project would have not been possible, and essential mandate delivery would have ground to a halt, with lives put at risk.