Celebrate Chinese New Year with Year of the Rat Stamps 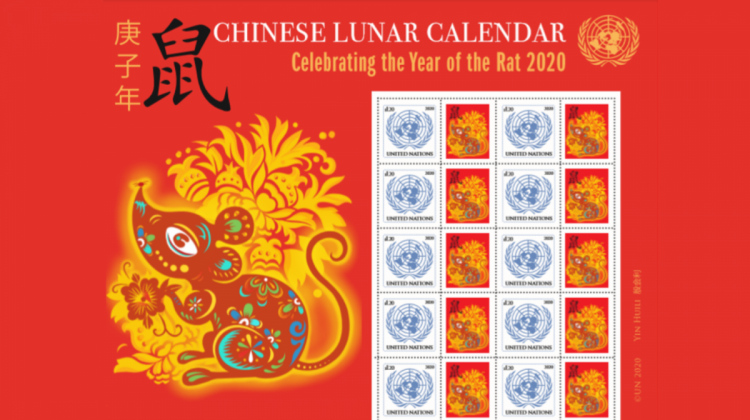 The United Nations Postal Administration (UNPA) in the Department of Operational Support celebrates the Chinese New Year with the issuance of a special stamp sheet commemorating the Year of the Rat.

The Lunar New Year officially starts on 25 January. This is the eleventh set of stamps issued by UNPA in the Chinese Lunar Calendar series.

The Year of the Rat is the first zodiac sign in the Chinese zodiac cycle.

According to myth, the Jade Emperor said the order of the animals would be decided by the order in which they arrived at his party. The Rat tricked the Ox into giving him a ride. Then, just as they arrived at the door the Rat jumped down and landed ahead of Ox, becoming first.

The Rat is the Chinese zodiac sign known for being inquisitive, shrewd, and resourceful. In Chinese culture, rats are a sign of wealth and surplus.

The ten stamps in the denomination of US$1.20 as well as the background of the stamp sheet feature illustrations by the Chinese artist Yin Huili.

To purchase these stamps, as well as other UNPA products, please visit unstamps.org.  You can also visit the UNPA stamp shops in New York, Geneva and Vienna.  The stamp can be used to mail postcards and letters around the world, provided they are sent from the UN Headquarters in New York, Geneva or Vienna respectively.  Follow UNPA on Facebook, Twitter and Instagram.