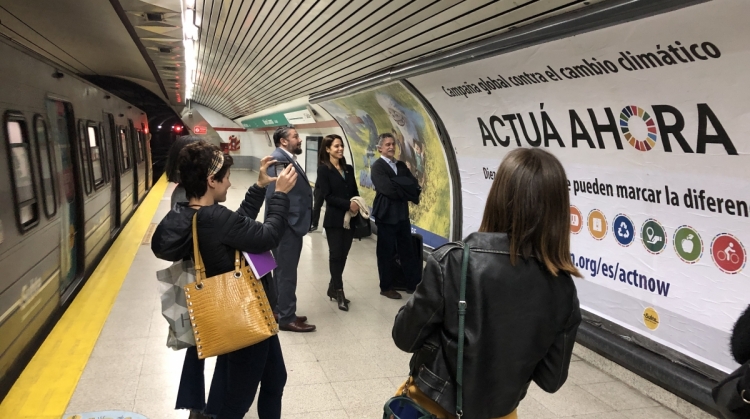 From 13 to 27 September, the 1,400,000 daily users of the Buenos Aires subway system came across 50 giant posters displaying the Act Now campaign across 35 stations.

The posters feature a call to individuals to make the fight against climate change their own by putting into practice one or more of the 10 actions featured in the campaign.

The massive display is the result of the ongoing partnership between the Buenos Aires Subway Company and the UN Information Centre (UNIC) in Buenos Aires. It planned to coincide with the Climate Summit taking place at the United Nations Headquarters.

The campaign was recently inaugurated in a subway station by UNIC Director Tamar Hahn and Buenos Aires Subway´s Manager for Partnerships and Communication Sergio Hernández.

ActNow is a critical part of the UN’s coordinated effort to raise awareness, ambition, and action for climate change and accelerate implementation of the Paris Agreement. It will educate and encourage individual actions, mainly by adjusting consumption patterns, changing habits and routines and making choices that have less harmful effects on the environment.

“By bringing the campaign to the Buenos Aires subway system, where so many people circulate every day, we call on Argentine society to join this global initiative,” said Ms. Hahn during her speech at the event.

“It is vital to work together to raise awareness about climate change and the direct impact it has on our lives,” said Sergio Hernandez.

“The subway is a very environmentally friendly form of massive transportation and we are very happy to be able to bring these important messages regarding climate change to the more than 1,400,000 people who use it daily so they can help make a difference.”