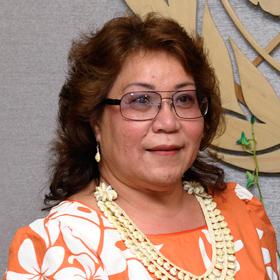 Until her latest appointment, Ms. Kabua had served as Ambassador to Fiji since 2009.  From 2003 to 2009, she held the position of Field Service Consultant to her country’s Ministry of Foreign Affairs, having serving earlier as Ambassador to Japan between 1997 and 2003.

Ms. Kabua served as Mayor of the Majuro Atoll Local Government between 1986 and 1997, having been manager of the Majuro Hotel for the Nauru Local Council/Phosphate Trust from 1981 to 1986.  Previously, she was a teacher at the Garapan Elementary School in Saipan (1978-1980).

She was educated at Chaminade University in Honolulu, Hawaii, in the United States; at Saint Francis High School, also in Honolulu; and at Mount Caramel High School in Saipan, Commonwealth of the Northern Mariana Islands.

Born at Majuro, Marshall Islands, on 15 August 1953, her hobbies include cooking, reading and gardening

On behalf of my colleagues at the Permanent Mission of Marshall islands to the United Nations in New York, I would like to welcome you to our website.

This is my hope that this website can help you understand more about Marshall Islands. The website is continually updated with new information and is intended to be a valuable tool for understanding Marshall island’s positions. So we have collected our main statements at UN Headquarters, contact information for our staff, travel information and country fact.

Thank you for your interest in the Permanent Mission of Marshall Islands to the United Nations in New York City. Your comments and suggestions are always welcome.