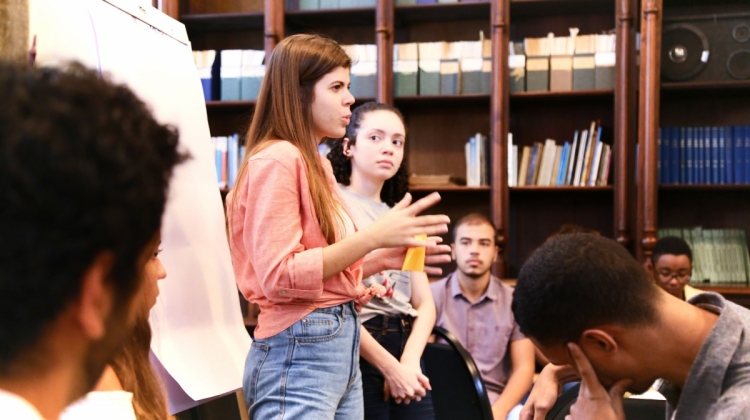 As Secretary-General António Guterres announced at New York Headquarters on UN Day plans to conduct a series of dialogues around the world for the 75th anniversary of the United Nations on “The Future We Want”, UNIC Rio de Janeiro was conducting its first dialogue on the subject with a group of students from the State University of Rio de Janeiro in Brazil.

The youth, who are studying oceanography, had a lot to say. They debated how countries and individuals can fulfil their commitments to the Sustainable Development Goals over the next 11 years, and how Brazil has had an important role to play on the environment since the United Nations Conference on Sustainable Development was held in Rio de Janeiro in 1992.

Protecting the environment continues to remain a top priority for these students, whose futures will be closely tied to monitoring marine life and sea levels and the impact of climate change on oceans.

In their view, the future they want will be based on economic growth along with social inclusion, education and environmental protection. The students also noted that the SDGs are interdependent.

“SDGs 1 and 2 are the pillars of the subsequent goals. It is important to understand this and take action,” said Mylena Pereira Rocha, in her presentation to the group.

The group agreed that even though it is vital to press the public and private sectors for changes towards sustainable development, individual actions are key to effecting change in their communities.

They spoke of actions such as reutilizing rain water, separating recyclable materials, composting and reducing the consumption of meat and food waste.

“We dream of a future with social justice in which everyone assumes a responsibility for the environment,” said one student.

Another commented that the UN was on the right path to achieve this, but that it was essential to establish a global agenda to guide the actions of all segments of society.

In terms of closing the gap to achieve a better future, education and knowledge sharing were foremost in their minds.