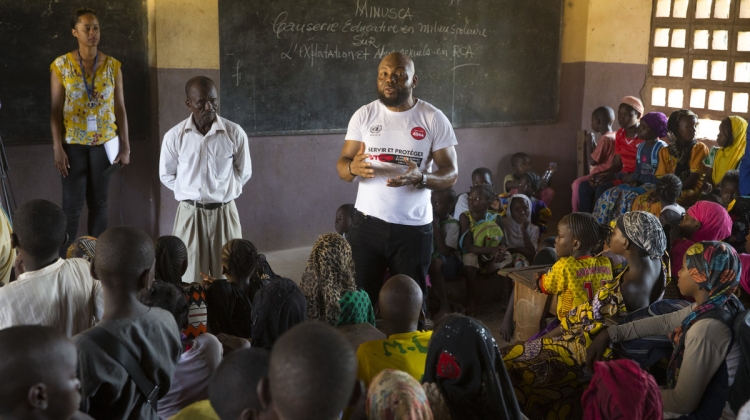 The fact that children continue to fall victim to sexual exploitation and abuse is a grim fact that carries serious consequences.

To address this, the UN Multidimensional Integrated Stabilization Mission in the Central African Republic (MINUSCA) launched an “Educational Talks” campaign on the prevention of sexual exploitation and abuse.

The campaign was kicked off on the grounds of the Central African Republic’s first school, the historic Koudoukou Public School in Bangui, in front of an audience of over 500 animated primary school children.

The initiative – which will run until June 2020 – aims at raising awareness among the population, including young school children, about issues related to sexual exploitation and abuse, in order to prevent them.

Reaching out to those who could be potentially affected is a key part of prevention and response efforts.

An early-warning network, comprised of men and women from the local community, has been formed as part of the campaign. It is part of 26 community-based complaint mechanisms that were established and equipped with basic communication kits to enable their members, also focal points, channel allegations of sexual exploitation and abuse involving UN personnel.

Alexandre Cudgenslhey, MINUSCA Conduct and Discipline Officer, explained the seriousness of sexual exploitation and abuse to children and teachers. He talked about ways in which it could manifest itself, such as giving money or gifts in exchange for relationships of a sexual nature.

“The campaign is part of the MINUSCA strategy to end sexual exploitation and abuse, especially in school environments. It is carried out with the support of all levels of society, as well as United Nations agencies, funds and programmes in the country,” he said.

He emphasized that speaking out is imperative, whether in the capacity of someone who has been affected or as a witness to a potential case of sexual exploitation and abuse. Students and teachers were asked to report all suspected cases of sexual abuse to MINUSCA, by calling the toll-free 4044 number, or through the members of their neighbourhood’s early-warning network.

The educational initiative is a country-wide project in schools and communities. It will target areas with the presence of temporary or permanent UN military camps.

“We as trainers and students need to be informed and trained. Today’s event is timely because it sheds light on a situation that is often ignored by a large part of the education system,” said the school director.

The campaign is part of the implementation of the Secretary-General’s ‘zero tolerance’ policy to combat sexual exploitation and abuse across the United Nations. A policy that is fully carried out within MINUSCA through early sensitization of personnel, military and civilian, upon entry on duty and also throughout their mission.

Extending it to the population, and to groups particularly at risk, such as children and women, is a way to better tackle the issue.