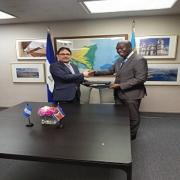 September 17, 2019 -United Nations New York, The Kingdom of Eswatini and the Republic of Nicaragua established formal diplomatic relations today. The agreement that solidified relations dating back to the common membership of the United Nations by the Two Nations in 1968, was signed in New York. The government of the Kingdom of Eswatini was represented by H. E. Mr. Melusi Martin Masuku, whilst the government of the Republic of Nicaragua was represented by H. E. Mr. Sidharta Francisco Marin Arauz.

The two countries have shared interest on matters of mutual concern and supported many of the same causes in global relations. This includes matters of social development, climate change and development of resilience related to the impacts thereof, as well as a fundamental belief in multilateralism and dialogue as vehicles for continued peace amongst mankind. It is hoped that the strengthening of the bond shall yield increased mutual benefit for the peoples of both States.