The 13th St. Jerome Translation Contest is ongoing and the final deadline for entries - 31 January - is fast approaching!

The Contest is open to the following participants: 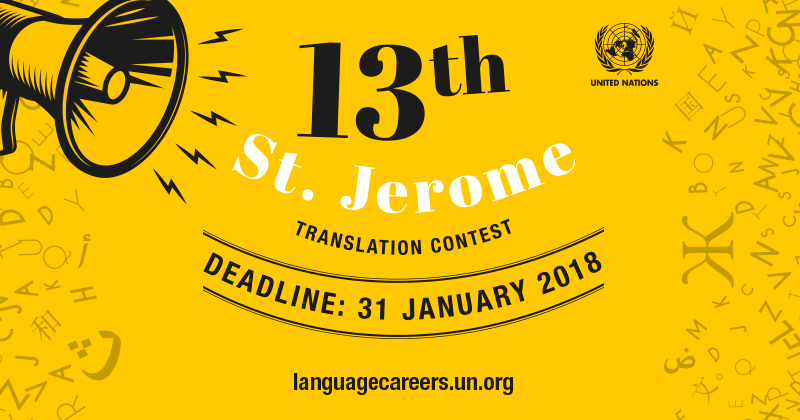 Participants should paste the text of their entry into an email (rather than sending it as an attachment) and attach the registration form to their message. Participants who are on short-term contracts are asked to use a personal email address so that they can be contacted later.

Entries should be submitted to the following email address no later than 31 January 2018: SJTC@unog.ch

The winners’ names will not be disclosed until the official announcement at the awards ceremony, to be held at the United Nations Office at Geneva on 9 May 2018.

Contestants are requested to visit the new Contest website to download the texts for translation and the registration form.

About the St. Jerome Translation Contest

Launched in 2005 by the English Translation Service at UN Headquarters, the Contest is held each year to commemorate International Translation Day. In 2017, the Contest was welcomed by the General Assembly in its resolution 71/288 on the role of professional translation in connecting nations and fostering peace, understanding and development. It serves to celebrate multilingualism within the United Nations and highlights the important role that translators and language professionals play in the work of the United Nations and in the world at large.