NEWS FROM THE UN AND FROM THE WORLD

For breaking news on events across the UN system, visit the UN News Centre, a multimedia Internet portal in the six languages (English and French as well as in Arabic, Chinese, Russian and Spanish). You can follow the UN News Centre in English and French on twitter and facebook, subscribe to feeds or sign up to receive e-mails on topics of interest.

Coverage of the meetings of the Security Council, General Assembly and other main bodies is also available, in English and French. It is possible to subscribe to a feed to all meetings and press releases. Of course, you will find out about meetings scheduled in the Journal, available in six languages and you can follow the Journal on facebook and twitter (see also eSubscriptions).

UN Radio podcasts and news agency style snippets can be subscribed to by RSS or you can keep yourself informed by referring to UN Radio’s facebook page, twitter feed or iTunes podcasts. UN Radio broadcasts in six languages plus Portuguese and Kiswahili.

The Web Governance page lays out the guidelines for creating websites at the UN and on making them accessible and multilingual.

UN Information Centres around the world report on their outreach activities on their own local rss feeds and there is also a central twitter feed.

The Dag Hammarskjöld Library offers access to a wealth of databases, intelligence reports and encyclopedias online on the web on its E-Resources page.

Other resources are only available on the iSeek network.

Samples of reference material among hundred others available include the Economist Intelligence Reports, Facts on File; Europa World; the Statesman's Yearbook; and Stratfor reports.

For general reference, the Encyclopedia Britannica is available with versions in French, Chinese, Spanish, Japanese and Korean.

For legal information resources see the Dag Hammarskjöld Library's Law Library page on iSeek, including access to the Westlaw e-Library with Black's Law Dictionary and other key legal reference works.

The Library Client Services of the Dag Hammarskjöld Library can also be consulted on information issues: telephone: + 1 212-963-3000 e-mail: Library-ny@un.org

Official Document System of the United Nations (ODS). Let's imagine you are looking for the text of a recent resolution adopted by the Security Council on Libya. Type in "security council Libya" in the search field on the ODS page. The resolution appears third in the results. For better results click on "sort by date"; resolution S/RES/1970 (2011) on Libya appears at the top of the search results.

For a more targeted search, you may want to use the previous version of the ODS.

ODS is accessible to the public from anywhere in the world, and there is a quick link on the iSeek home page. Note that besides the six official languages, DGACM provides access to some documents in German.

If you are not sure of how to decipher UN documentation, the Dag Hammarskjöld Library regularly holds training sessions on using and finding UN documentation or try one of the Library's online tutorials.

Quick Link URL - If you already know the symbol of the document you are looking for, you can create a link to it and access the document directly, by building on the URL 'http://undocs.org' (http:// is actually optional).

To recreate the symbol for a GA document, use the unique symbol "A" and add the session number plus the number of the document. If we want a link to document number 537 published by the GA during its sixty-fifth session, it will look like this: http://undocs.org/A/65/537.

If you type it in a web browser, you will get immediate access to a menu offering you a choice of a pdf in any of the six official languages.

Similarly, if you are looking for Security Council resolution 1969 adopted in 2011, you would only need to type in http://undocs.org/S/RES/1969(2011). For more information on symbols, please refer to the Research Guide to United Nations Document Symbols.

Instead of looking for documents, you can choose to let them come to you, especially as they are published. There are many options to choose from on the e-Subscription page:

RSS feeds for your browser or mobile device - RSS feeds are available for many documents. You can subscribe to a feed of the UN Journal and all new documents from the General Assembly, the Security Council, the Human Rights Council, the Economic and Social Council, Others or combinations of these.

E-mail Subscription - You may opt instead to have them sent directly to your e-mail address - beware not to flood your mailbox though. Documents keep coming at as fast pace.

eDocuments for eReaders - For the process verbaux (PVs - in fact full transcriptions and translations) of meetings of the General Assembly, you can opt for the ePub format instead of pdf, which is specific to eReaders, from the Digital Magazine Downloads page offered by the Meetings and Publishing Division of DGACM.

Many reference books and reports published by the UN are available electronically for Kindle and eReaders, the iPhone and iPad, Android and other mobile devices on the UN Publications page. This includes iPhone apps, or electronic book on the iBookstore from Apple or the Kindle store from Amazon.

These materials include, to name but a few: the Charter of the United Nations, the Universal Declaration of Human Rights, and the "Blue Book" of Permanent Missions to the UN. 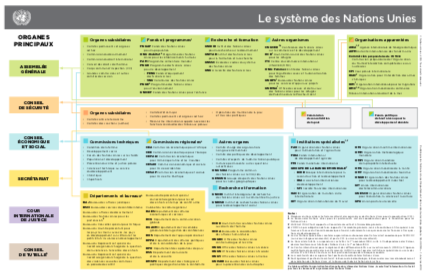